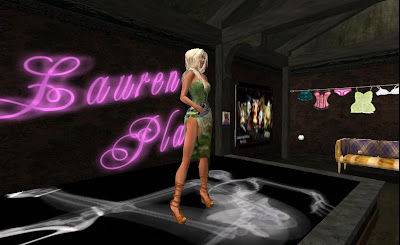 Frets Nirvana
is the premier fingerstyle guitarist performing in the virtual world Second Life. Combining acoustic and electric guitar with vocals what you get is Total Guitar when listening to Frets!
-
Total Guitar! That is what you hear when you listen to Frets Nirvana. Using acoustic, resonator and electric guitars Frets pallette of sound is quite varied and always interesting!Frets Nirvana grew up in the rock and roll city of Cleveland, Ohio and in his good old band days could be seen hanging out and playing in clubs with the likes of Joe Walsh and the James Gang and Phil Keaggy and Glass Harp. While playing guitar for as long as he can remember, his love of that instrument developed into a focus on acoustic fingerstyle guitar. With wide musical influences such as fingerstyle masters Merle Travis, Chet Atkins or Jerry Reed, classic blues and rock players such as Jeff Beck and Jimmy Page to the infamous Gypsy Swing player Django Reinhardt, Frets draws on a huge catalog of music that features guitar in a wide variety of sound. Frets feels that “Life is too short for One Groove” and as a result his playing keeps the listener interested using all these musical colors. Adding vocals to his wide music variety of tonal colors, a performance by Frets Nirvana always offers interesting music for the listener. If you like great guitar playing then check Frets out in in Second Life! You are guaranteed an enjoyable music experience!
http://www.livestream.com/fretsnirvana
-----------------------------------------
Tunez
Live music in Second Life Good music, good people with a relaxed and casual atmosphere! Plenty of live performers that'll rock your world! Stop by and check us out!

http://www.livestream.com/SecondLifeHobo
Geo Meek rezzed in July of 2006. He was already familiar with 2D virtual worlds such as the Palace. Second Life seemd like a good venue for learning, and sharing. Since he was not a fan of a text only environmnt, Geo startd Skype groups with Second Life to enhance communication before in-world voice became a reality. In 2007 he met documentary film maker Molotov Alva, whose work Molotov Alva and His Search for the Creator: A Second Life Odyssey was purchased by HBO and premiered on Cinemax in 2008. Geo Meek played the vary small role as a griefing clown in the subway , for which he was given proper credit. The experience inspired in him a desire to make his own videos. Geo calls what he does “video capture” or simply “video” rather than machinima. Most of his work is live, and captured rather than edited. Although he accepts freelance jobs for pay, much of his work has been done free of charge. He has made videos of weddings, musical performances, drama, lectures, and the day-to-day events of life in a virtual world. He has also earned a real life living in Second Life, working first at Language Lab and later as an avatar specialist for Humana. His focus now is on livestreaming video from Second Life to the web, a process which eliminates compressing and uploading, and saves on bandwidth and time
--------------------------------

Email ThisBlogThis!Share to TwitterShare to FacebookShare to Pinterest
Labels: VID