Streaming in two worlds.  Second Life and InWorldz.
-
Two places at once.  Live streaming music to both.  Bigger audience.   Fleure Homewood does it regularly. Since that looks like a way to expand musical entertainment  in the virtual worlds, I asked Fleure to write a bit about how this is done and how it is working out.
- 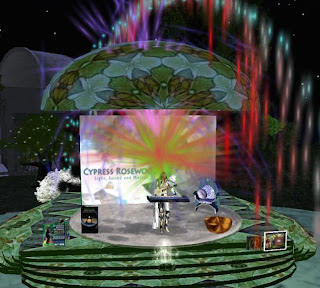 -
Streaming into two worlds
By  Fleure Homewood
-
There are several venue owners in IWz already offering some live music, as far as I know limited to IWz, and there are a number of SL musicians who are enjoying the nearly open field to get noticed.
-
Some of my musicians are able to stream into both the SL venue and the IWz venue at the same time.  Not all are able to, or are interested in a second virtual world.
-
So far my dual streaming musicians are

Others of musicians who play at my venue can't do dual  streaming but do separate gigs in both worlds, Hunter Quirina/Hunter Montgomery and Trav McCullough come to mind.   Several other of  the musicians who play at my SL venue have expressed an interest and are exploring possibilities.
-
So far I have not had any events only for IWz, but I am considering it.
-
Dual streaming into both SL and IWz requires a strong computer or else 2 computers;  I believe most musicians use their desktop and a laptop.  Computer and sometimes the ISP are the main limiting factors that  block some musicians from simultaneous shows.
-
It is easy to put the stream in both venues.   The musician needs only the one stream he or she already uses in SL.  I put the stream url in the parcel audio box as usual, in both worlds.
==================== 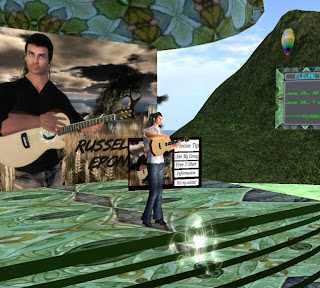 Russell is streaming into InWorldz as well as into Second Life. His fan groups are over 900 in Second Life and over 60 in InWorldz.
- 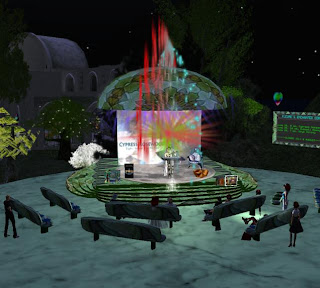 Cypress Rosewood
With particle effects
================================================
My comments
Fleure added that there were rumors that some of the virtual worlds did not like dual events and were trying to prevent them.   I don't doubt that operators of virtual woulds would rather not share a stream with a competitor, but I don't think there is any practical way to prevent it  And they will not want the bad publicity they would get when they are "outed" by a recently departed employee.
-
Merely streaming to two or more venues requires no additional computer resources.  If the performance gets more audience, the performer would have to upgrade the stream for more listeners.
-
But live performers want to interact with the audience.  That means running two viewers, probably on two computers, with two screens.   The hardest part may be for the performer to follow to streams of live chat.  That is probably why some further innovations will be needed to scale up to an audience size that can be considered successful.
-
Some performers already have associates who engage in local chat during a performance.  That takes some of the load off the performer.  Dual streaming allows two performers on the same stream.  In the present versions, they usually perform together, but they could also alternate solos some time, one playing while the other catches up on the  local chat.  Perhaps with that model, they could each take one venue and avoid the the need to handle two computers.

Email ThisBlogThis!Share to TwitterShare to FacebookShare to Pinterest
Labels: Note