The writers group at Nara's Nook has started a learning and production project using the guide book "The 90-day novel," by Alan Watt.  To contribute to the project without spending the time on a novel, I am writing a short story or small play using some of the guidance from the book. 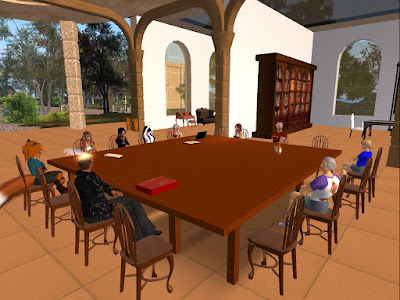 Well Jason called me a super-geek again this Friday.  But it didn't work out the way I planned.  The way It started was earlier he couldn't get his computer to print the address labels.  He's in Packing and Mailing, you know, and this was Friday, so everything has to go out.   And I walked by on break, so I heard him talking to his computer.

I have felt like talking to my computers that way lots of times, but not so loud.  So I stopped and fixed it for him.  Poor guy, he is a klutz with the keyboard and they give him a tiny little keyboard.  His hands are too big for it.  I got little hands and they give me a huge keyboard.  Like Hermione would say, life is not fair.

Anyway, at the happy hour Jason told everyone about it.  "It was stuck in the muck and Jane came by and fixed it.  Pressed one key and fixed it."

Actually, it was three keys at once, but I didn't correct him.   So he went on, "Super-geek saved my day."

Well, what could I do with that?  He wasn't putting me down.  That was sort of a compliment.  I mean, it still sounded like I was abnormal, especially for a girl.  But not a bad kind of abnormal.  I had to think that over for a moment.

But you can't be slow on the come-back with Hermione around.  She jumped in, "Like it says in the Bible, the Geeks shall inherit the earth."

And Jayson said, "Yeah, that's what I'm afraid of."

Anyway, I am really confused now.  I thought he was putting me down when he called me super-geek.  But now I don't know.  I really good at computer-taming.  And that's abnormal for a girl.  My mother hated for me to even have a computer.  I lied and told her I had to have it to make good grades in school or I never would have gotten it.

My mother did want me to make good grades in school.  She knew that plain Jane would never get a good man.  She used to tell me a good man is hard to find.  I knew what she meant.  Hard to find for me.  Plain Jane had better be able to fend for herself.  Well, I can do that.  Super-geeks are abnormal and they are hard to find, too.

Only I can't fend for myself with people.  Give me a computer and I am in control.  But I am just Plain Jane over beer.  And I probably think too much.  That would make me dangerous if I were a man.  But it just makes me shy over beer.  Or maybe standoffish.

Or maybe confused.  I know what Hermione would say.  "No.  You were confused before.  Now you are just finding it out."   Hermione always knows something smart to say.  I wish I could think like her.  Dammit, If I am so smart, why can't I think like her?  And why am I confused?

And why the hell do I feel like I won something today at happy hour when I didn't get to use my power name on Jayson?  Well, I've still got it in reserve.  People are so confusing.  No wonder I like computers.
*****************
This (the multi-part series including this part) could be a short story or a one-act play for one or three actors.  I relinquish all claims to the copyright and declare all work by me under the title "Jane, Plain Jane" to be in the public domain.