This sim is being used by FreeWee Ling for numerous different projects over the next few months. Installations and objects and land forms are likely to change a lot. The primary function of the work here is to support my 2015 Endeavour Executive Fellowship - a grant provided by the Australia Department of Education for professional development. 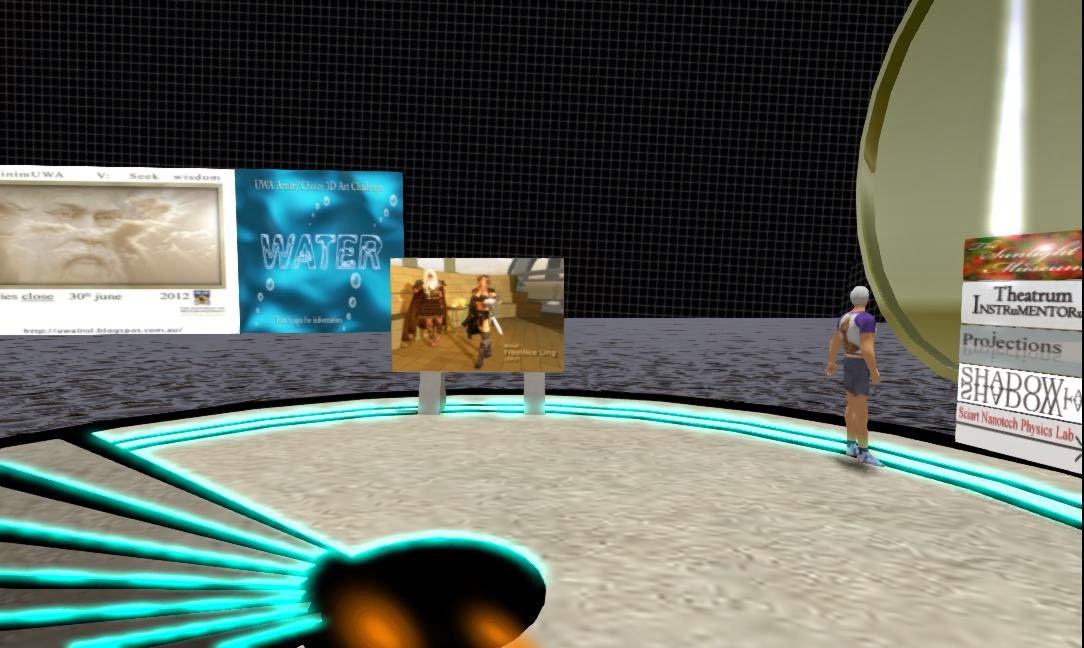 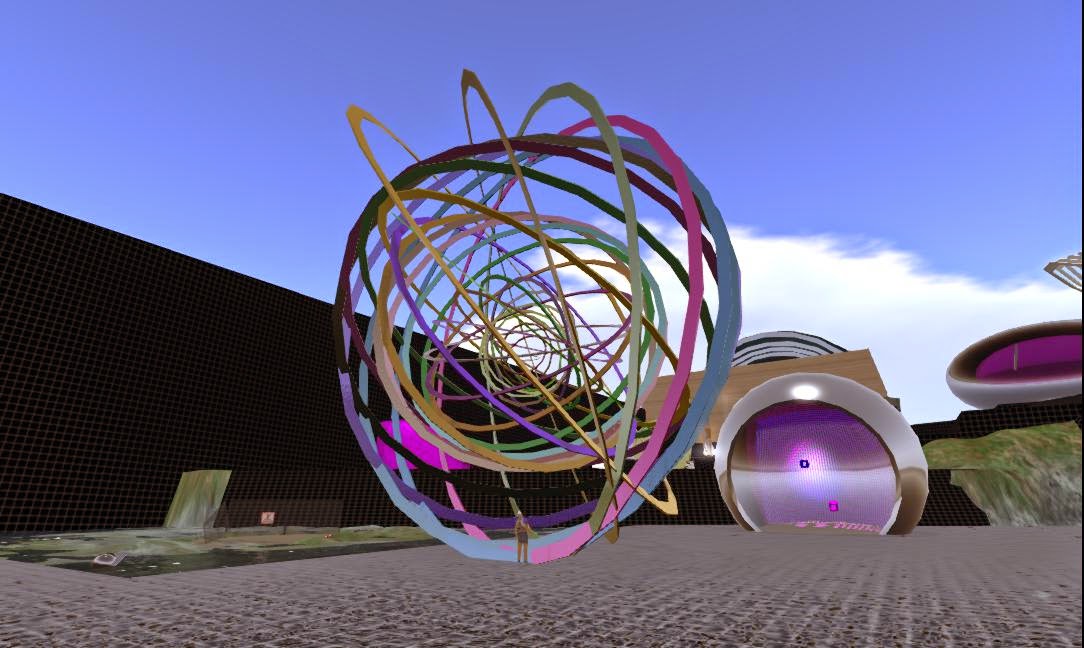 It changes, but you gotta be there
-
- 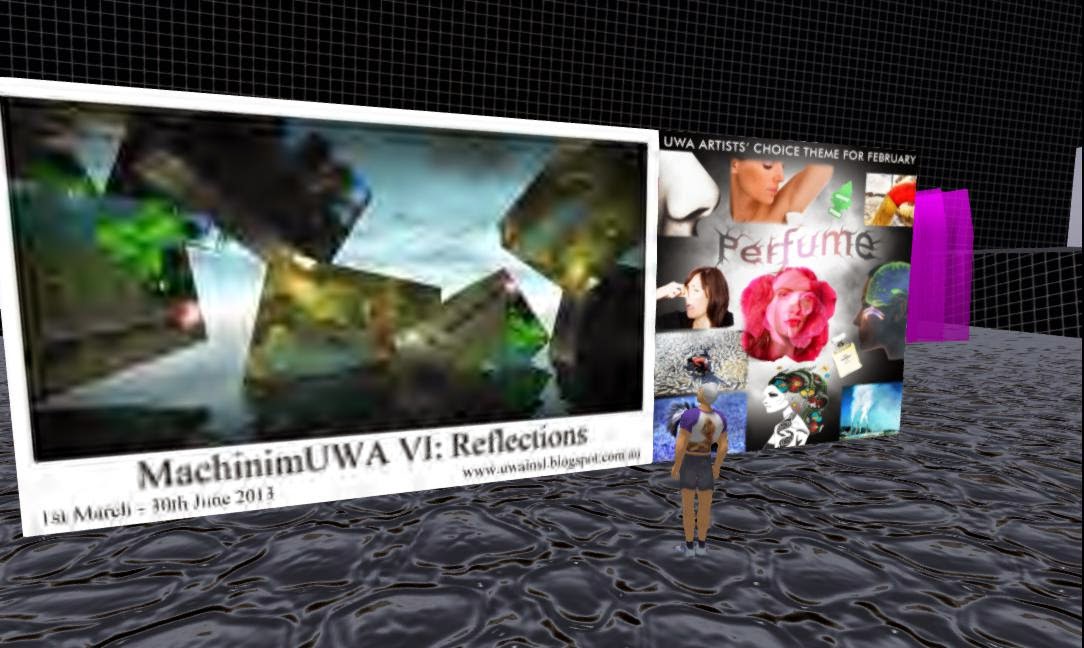 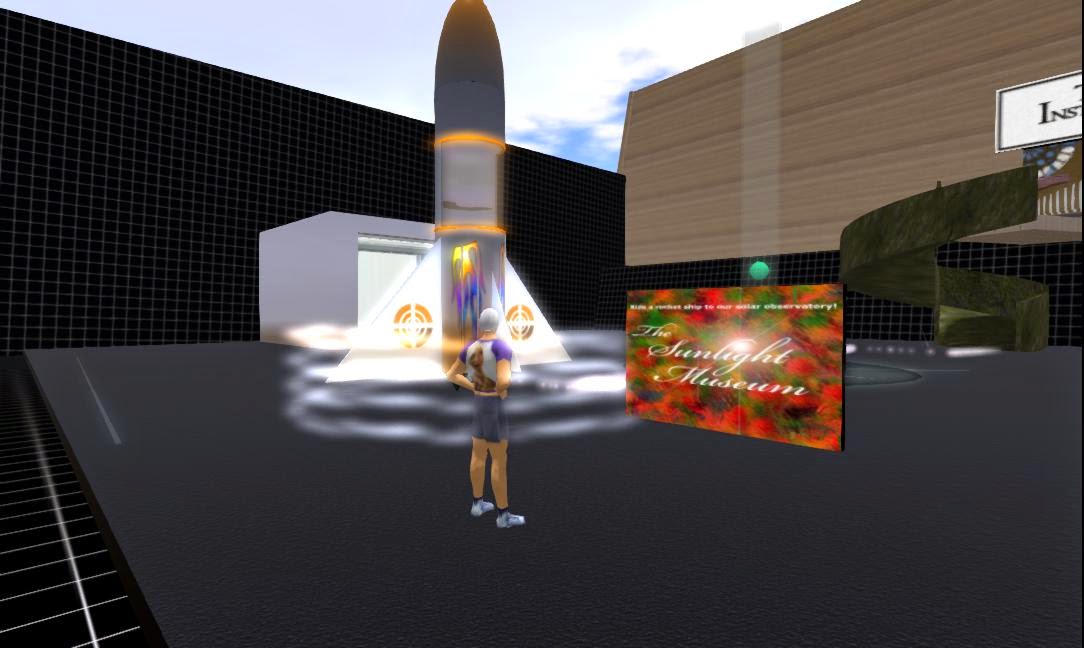 You can put on your goggles and SPF 1000 sun protection and take the elevator to the solar observatory where you can see a giant sun up close and personal, including some pretty spectacular coronal mass ejections. Transport to the Sunlight museum is via rocket ship from ground level. 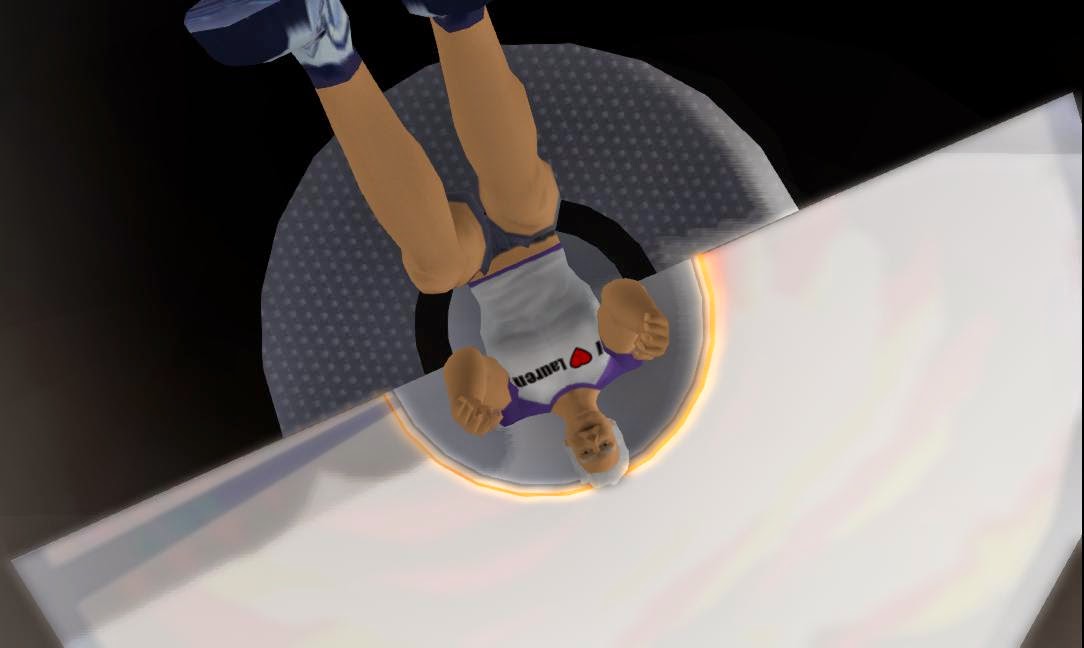 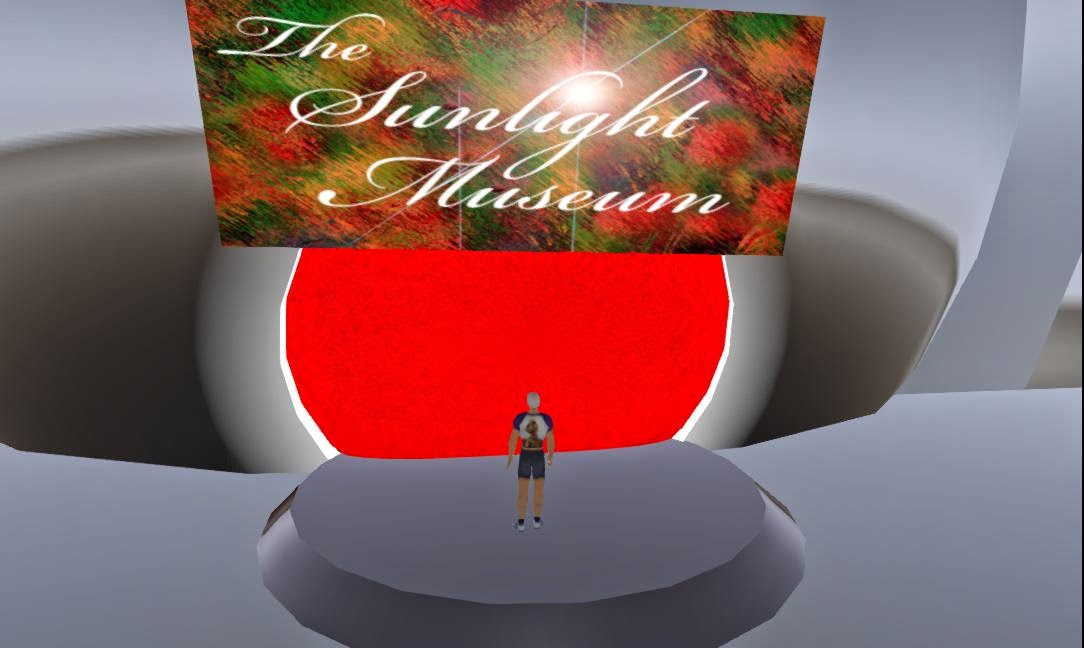 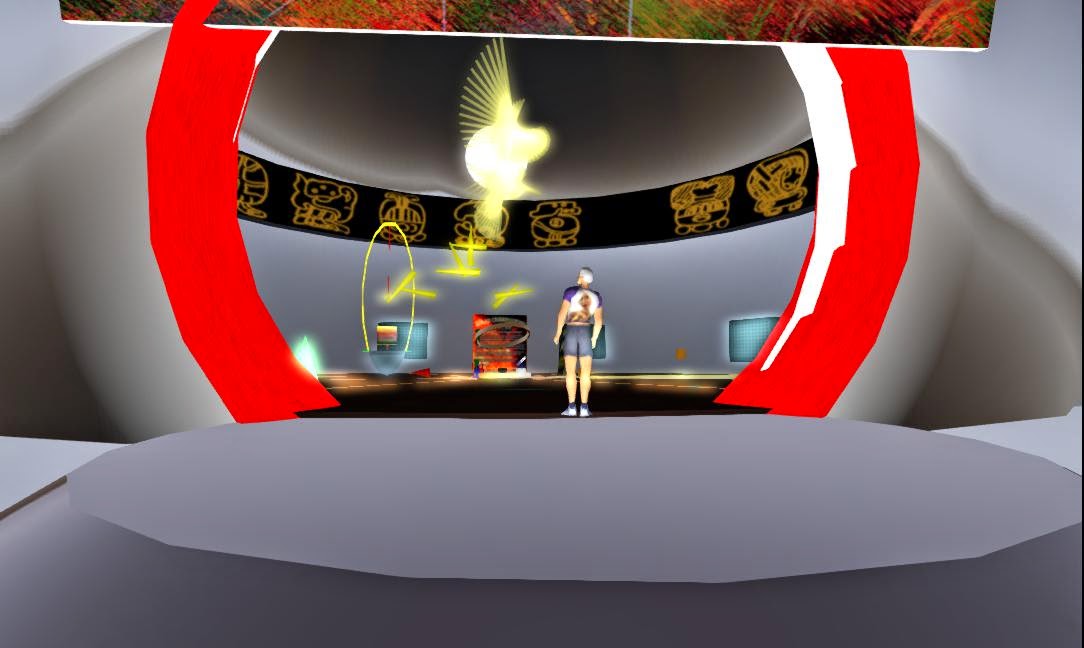 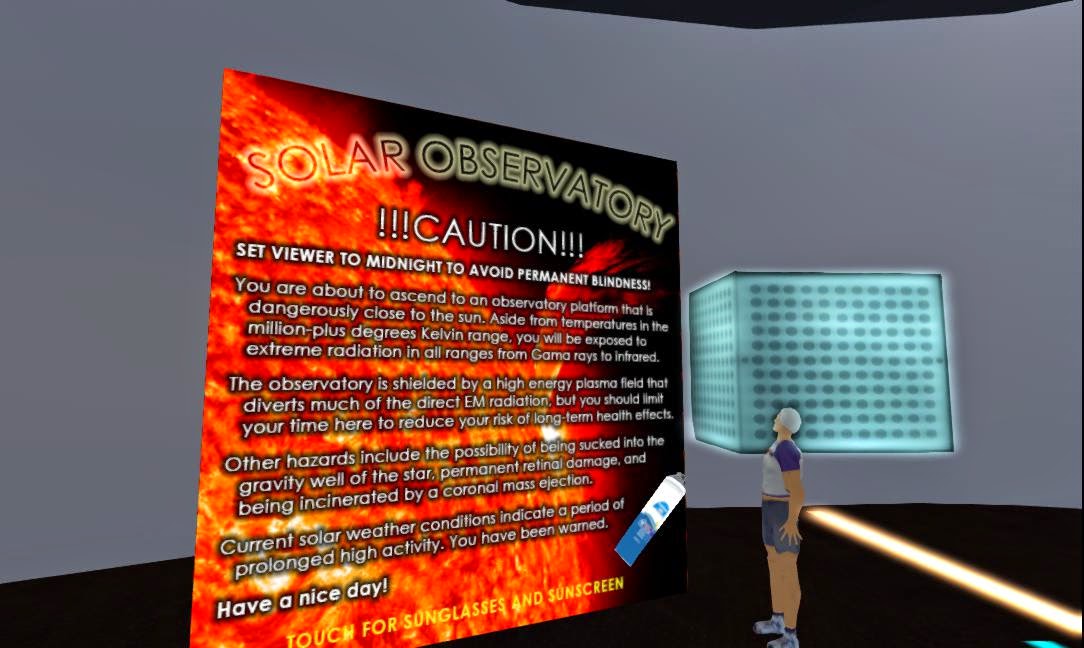 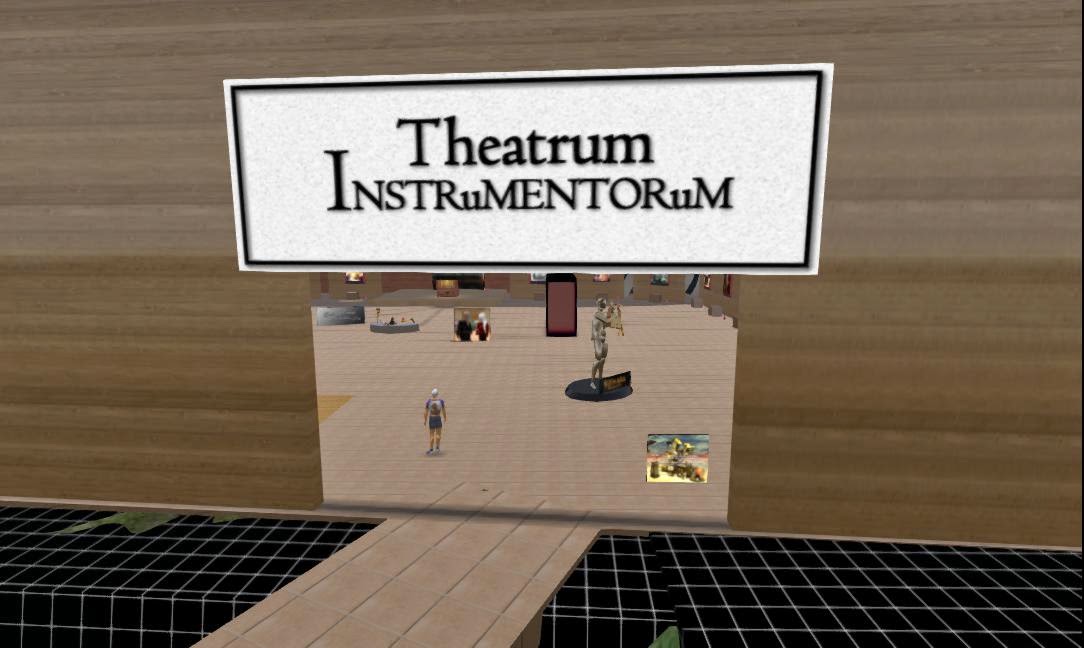 Now open for viewing is the latest edition of "Theatrum Instrumentorum," a museum of musical instruments created over the last several years with fellow musicologist Oriscus Zauberflote. 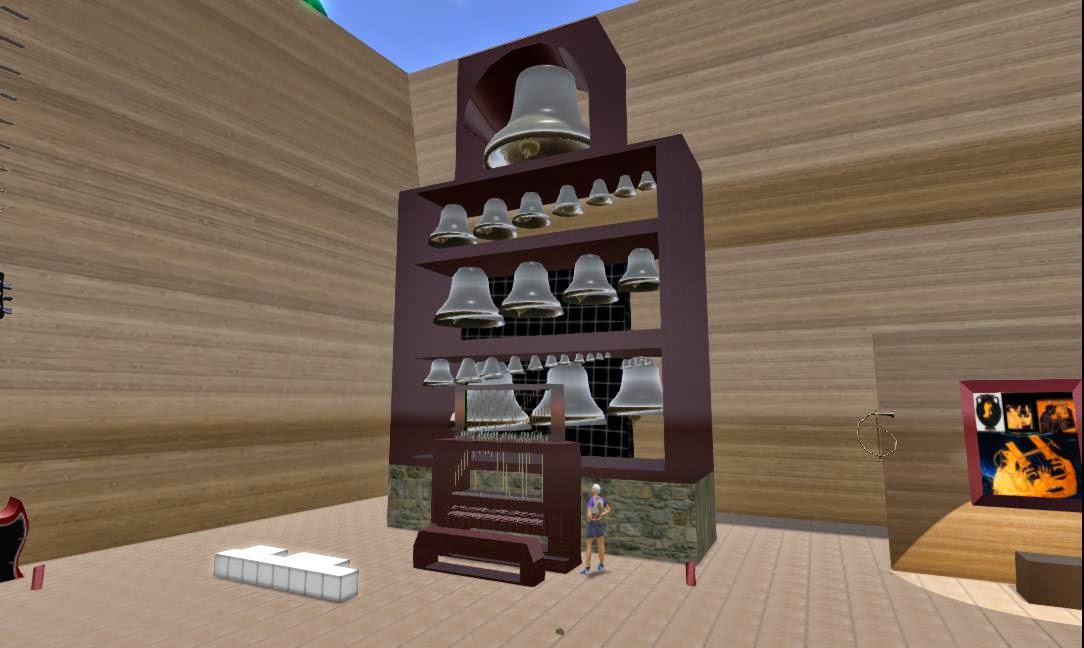 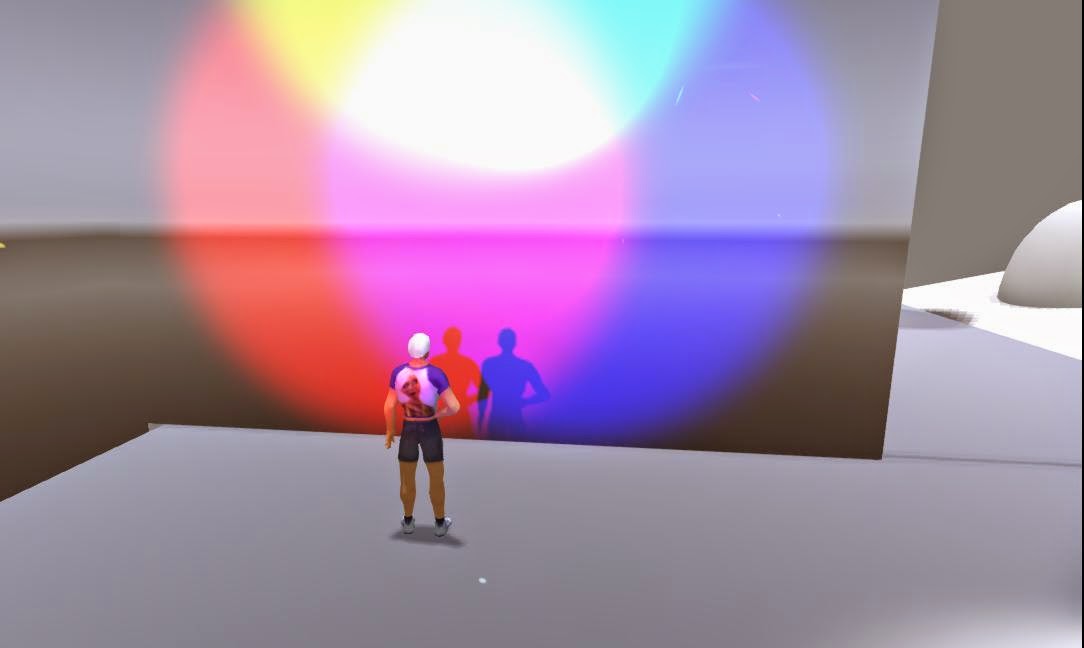 Shadows are to explore
-
- 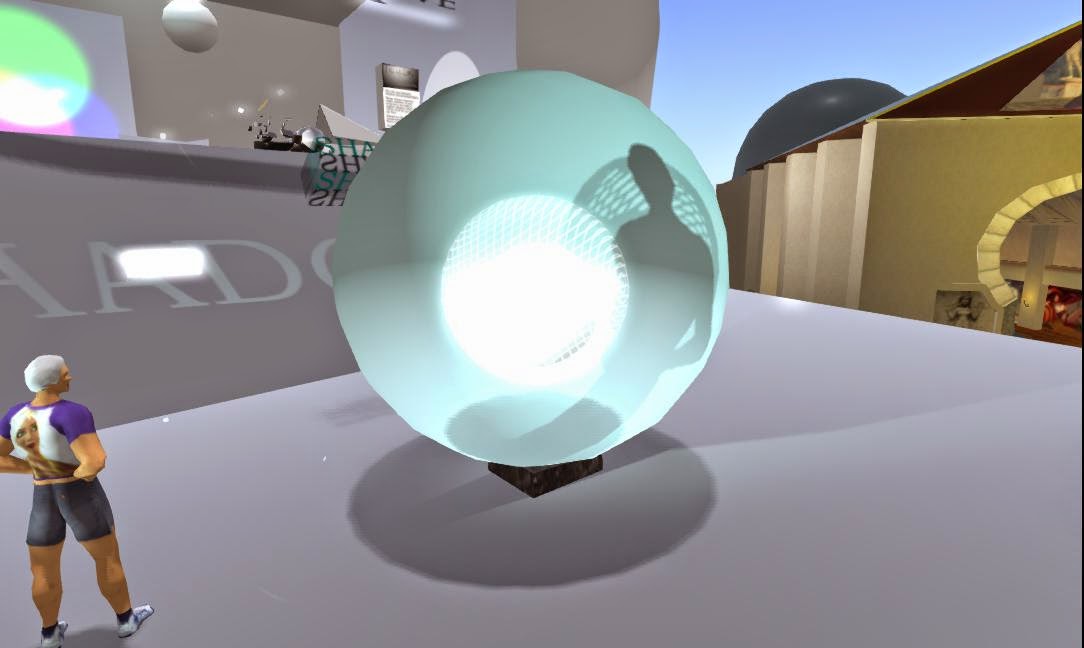 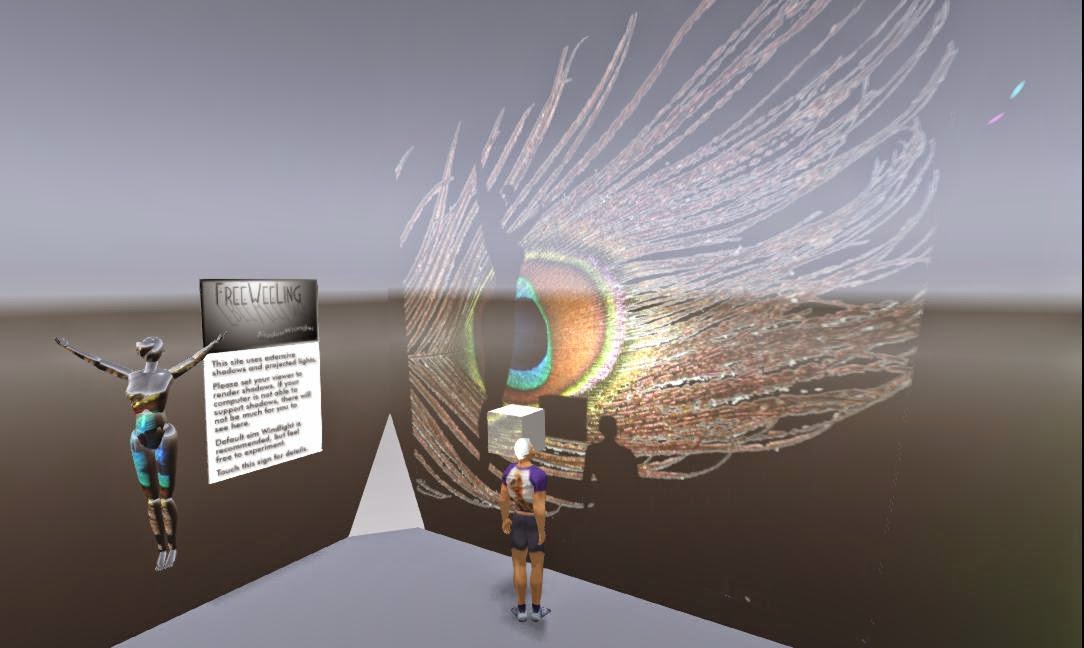 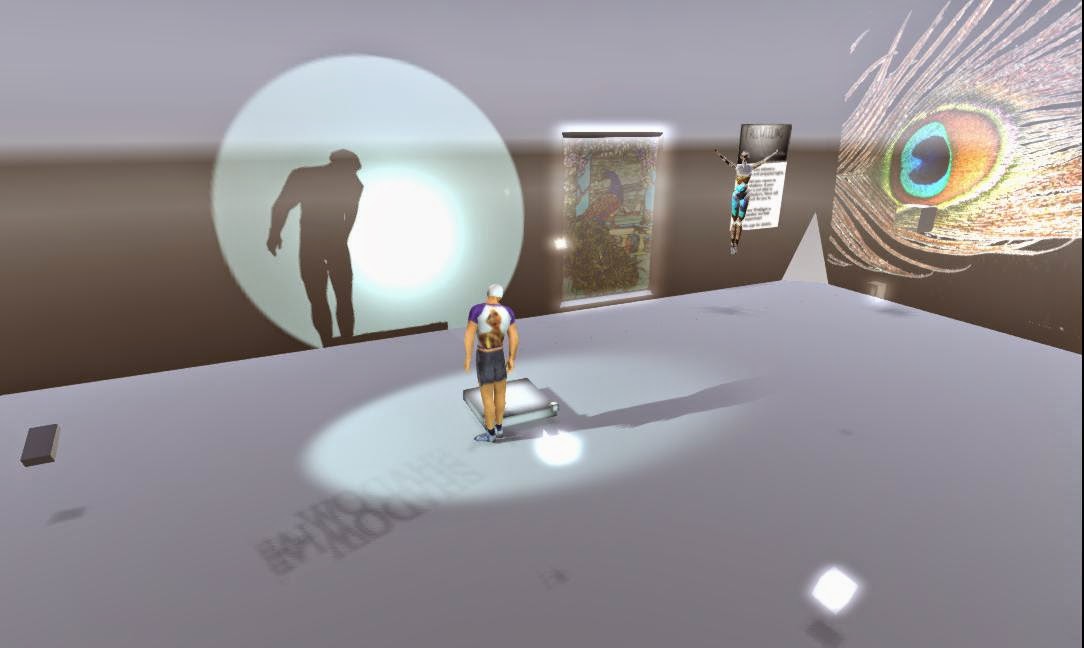 Where is the projector?
-
- 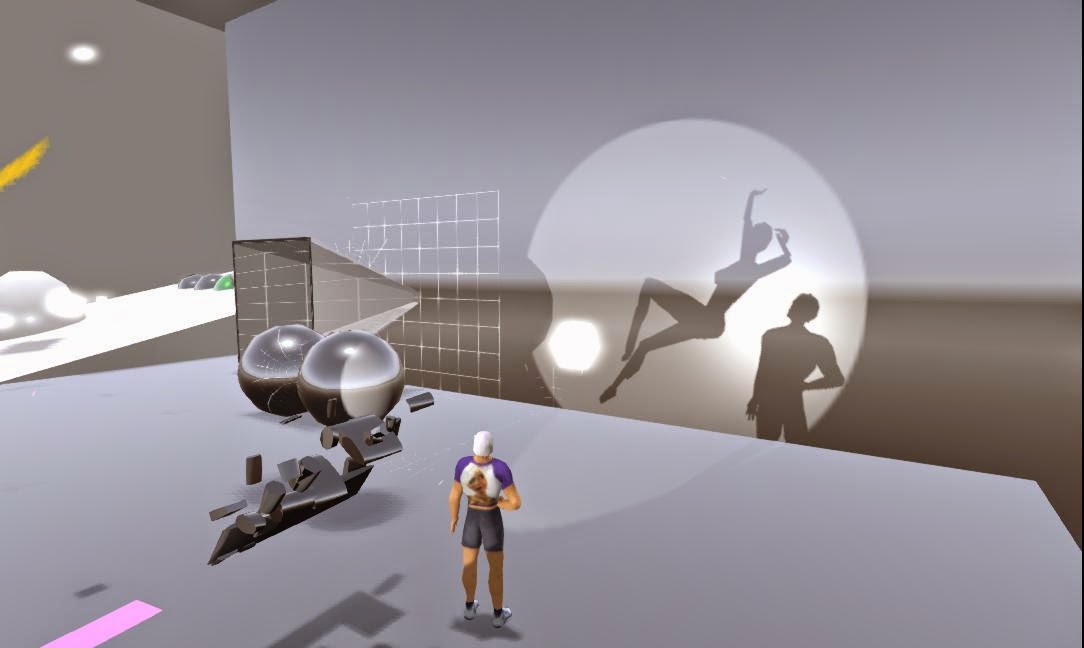 The lady in the shadows 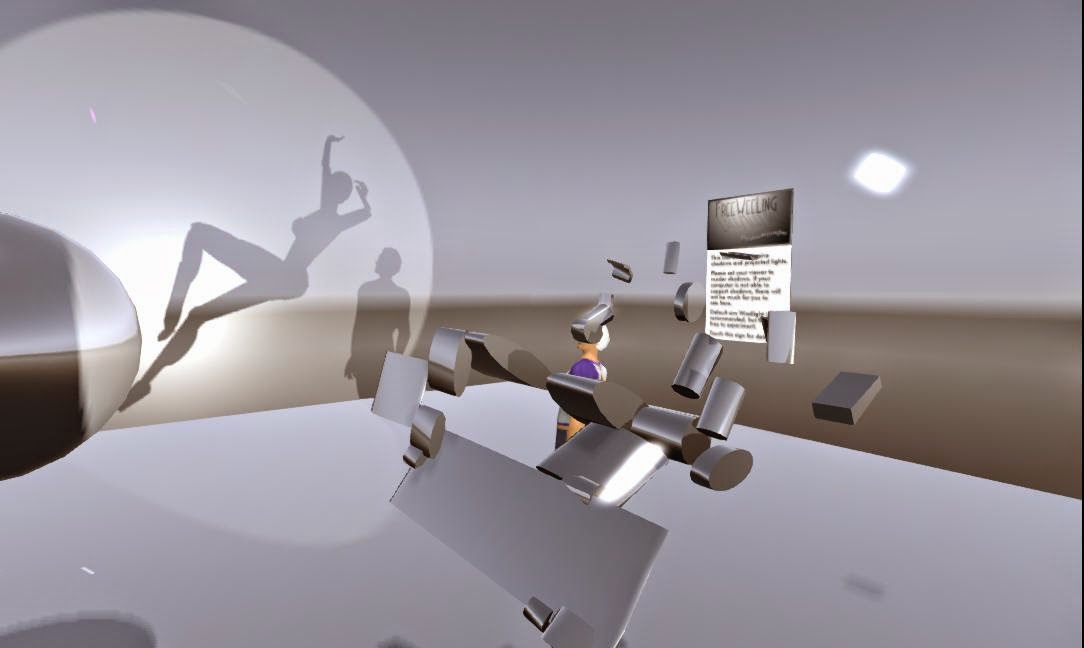 Rezzed late in 2006. Usually physically located (rl) in eastern time zone, USA.
From January to May 2015 I am in residence at the University of Western Australia on an Endeavour Executive Fellowship from the Australia Department of Education.
Former owner of the Artemisia artists community sim for 4 years (closed Feb, 2013) -- home of FreeWee's Laboratory, the Treehouse at Artemisia music venue, Galerie de la Vie, and Tuscania Gallery.

A musicologist by education with a specialty interest in musical instruments (history, physics, use, etc.).

In real world I use technology as an administrative and web development professional in support of educational, arts, and cultural organizations.
----

I'm not really a artist. More like a  kid in God's Legoland. I'm an idea manipulator.  A conceptual cubist. Most of my work is clearly derivative. I see something interesting and I want to know how it works, so I deconstruct or reconstruct the idea or combine it with some tangential idea to make something new. I am often working on some random project with no particular purpose in mind.

The Freedom Project (2014). An exhibition at UWA of 2D and 3D art, words, and machinima by artists with disabilities or chronic illness. The exhibition catalog is available online at: http://uwainsl.blogspot.com/p/uwa-siva.html

Philosopher's Stone (March-December 2014). "Nietzsche." Installations by Caerleon artists reflecting the work and ideas of important philosophers. The philosophers were assigned randomly to the participating artists from a list prepared by Georg Janick (rl Gary Zabel of U. Mass,). The exhibition was organized by Pixels Sideways for a LEA sim.

LEA Interim Project (January 2014). Full sim show including a gallery of recent and not-so-recent work, and a sim-wide installation ("Are There Strangers Among Us?") with multiple scenes depicting an apparent alien invasion.

UWA Centenary 3D Art Challenge (April-July 2012). Curator. A single round competition similar to the monthly challenges from the previous year, but with certain limitations and major prize incentives.

ArtGyro (March 2012 – continuing). A continuation of the previous project supported by the LEA and the School of Virtual Arts (SOVA).

ArtGyro (November 2011-March 2012). A full sim land grant provided by the Linden Endowment for the Arts. The site is intended to serve as a nexus for sharing arts information and supporting collaborative relationships with a focus on long-term sustainability for arts in virtual worlds.

“Art, Creativity, and Virtual Society” (October 2011). A paper on UWA’s activities in Second Life as a successful model for encouraging public engagement in collaborative work in virtual worlds. Published in the procedings of the 10th International Scientific and Practical Conference on the theme: “Partnership of Business and Education in Regional Innovation Development,” Moscow State University of Economics, Statistics, and Informatics in Tver.

University of Kentucky Department of Art (summer 2011). “Curator’s Choice,” an exhibition of SL art from my personal collection.

UWA 3D Open Art Challenge (April 2011). Created a special exhibition (“When Less is More”) of non-scripted entries from the March round.

Caerleon Museum of Identity (October 2010). Led a team of 18 artists in a major sim-wide collaborative exhibition on the theme of “Ambiguity of Identity.” After a year of planning the show opened with over 1500 unique visitors in its first week.

Galerie de la Vie (May 2008-January 2011). The community gallery on Artemisia presented many engaging exhibitions by some of the top artists in SL, including Gwen Carillon, Misprint Thursday, Monroe Snook, White Lebed, Hephaistos Semyorka, Glyph Graves, elros Touminen, and an Artemisian’s residents’ show, among others. The shows were curated by RobertStephen Smythe, Apollo Renault, and myself.

Caerleon (SL) and Harbor Gallery, UMass Boston (April 2010). Participated in ‘Through the Virtual Looking Glass, a mixed-reality international exhibition with simultaneous events in several venues in SL as well as in rl galleries in Boston, France, Holland, Germany, Brazil, and Australia.

“You have one thing to do. Make that monster leave, and make him take his abomination with him.”

By special permission of the author, our own Iain McCracken (Sodovan Torok iSL) we have adapted his hard sci-fi novella from the collection "Dreams and Snippets", available at Amazon:http://www.amazon.com/Dreams-Snippets-Iain-McCracken/dp/1483943046/ref=asap_bc?ie=UTF8

This week at the Short Poetry Workshop Arabella Nemeth is guest host for the Genre-Humorous Pessimist workshop. We will write poems with a light-hearted look at a negative world view. If enjoy Eeyore from Winnie-the-Pooh, come try your hand at writing poetry in his style. So join us at the Short Poetry Library to learn, write and share you poems.

From any Hypergrid-enabled grid, paste the address into the navigation bar of Firestorm and press enter. Or paste it into the world map search bar of any viewer, search, and click Teleport when the destination is found. If it doesn't work, don't give up. Try again in a minutes.  Sometimes the first try fails (probably times out).  And try again a few hours later. Some hypergrid destinations are offline part of the day.

Email ThisBlogThis!Share to TwitterShare to FacebookShare to Pinterest
Labels: ART