2015 PEOPLE: Where is everybody? Space makes virtual worlds look empty. 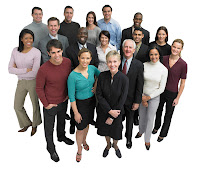 That is a picture of a crowd?  Actually, there are fewer that 20 people there.  If they were in a virtual world, they would probably be spread over hundreds of sims.  The place would look empty.  Hundreds or thousands of sims make for mostly empty space.


One of the complaints I often  hear about virtual worlds is that there is nobody there.  Not just in Opensim.  In Second Life, even back in the days when it had 70K-80K on line at a time, new people would ask me "Where is everybody?"   That 80,000 is a lot of people.  But spread them over 30K sims and you average fewer than 3 avatars in a sim.
-
That is a population density slightly greater than the population density of Texas. But if you fly into Texas, you are not going to look around the airport and ask "Where is everybody?"  Well, maybe you will at Terlingua Ranch Airport.   But not at DFW.  And when you get out on the road, you will be asking "Where are all those wide-open spaces?"
-
You know why those wide open spaces are empty and people are crowded into cities.  Because that is where the people are.   People go where people are.
-
Those of us who have been virtual for a long time have lots of contacts and know how to find people who share our interests.


How could we do it differently?

In Second Life, communities have tried to get some kind of arrangement that would bring newcomers directly into contact with communities of their choice as they arrived.  In the past, there was a community gateway project that provided entry ports for new people.   New people could choose those places on entering Second Life; they would arrive at a place with instructional displays and helpers who were members of the community that fitted their interests.
-
If a community were marketing outworld to attract people who were interested in what that community offered in virtual worlds, it could tell them about the community portal and invite them to enter Second Life through that portal.  That way the community could offer specialized onboarding, with introduction to what the community offered, instruction in any special skills needed to benefit from the community and freebies suited to the interests of that community.  Linden Lab cancelled that project (under one of its previous CEO's) before it got well started.   The current CEO has shown some interest in restarting the program.
But we can do it ourselves in the OpenSim community; we don't have a CEO to make decisions for us.


Get the communities into marketing and onboarding

An introduction to basic roleplaying skills and character creation in virtual worlds.