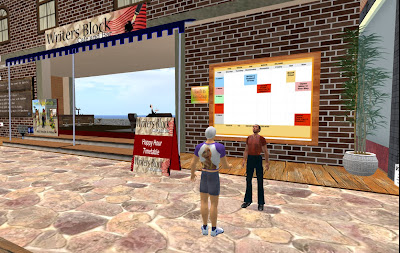 Sandor Zabelin and friend
Writers' Block Cafe
-
Location Link. Click to go or drag to the viewer screen:
http://slurl.com/secondlife/Book%20Island/212/225/37
-
Book Island, which is almost five years old, (we are celebrating the Island's Rez day this year!) is a diverse literary-related sim, with 60 shops, 5 houses, 3 events venues and a library. Our residents represent a variety of SL and RL businesses. Events are promoted through our Book Island Events and Discussion Group with over 2000 members. Residents also belong to the Publishing Village Residents Association.


The owner of the island, Selina Greene, (rl  Sheena Dewan-Herrick)  entered SL in January 2007 to market her RL publishing company in a new digital environment.  On her first 512 metre plot of mainland she built a display area for her books and an event space.  Within weeks she pooled her land with her SL neighbour, Roman Zeffirelli and invited other writers and publishers to join her. Early residents included Elan Neruda (Steve Miller, author of the Liaden series) and Scar Ayres (Blue Scar Books). In March 2007, she commissioned a RL book about SL from Madddyyy Schnook of SLguides  The Book Publishing Village on the mainland was born.
-
The village held events and the group membership and tenancy grew. In April 2007 the village hosted its first SL Book Fair, which and 1300 visitors over 2.5 days and around 15 events over the weekend. Timed to run the week after the RL London Book Fair, the fair gathered press in the publishing industry with articles in the UK Bookseller Magazine, the Italian book trade magazine and even the UK Channel 4 news podcast.  It was a great community effort - with a great deal of help from Jilly Kidd and others.  To accomodate the growing popularity of the village,  a sim named Book Island was bought in April. Many of the exhibitors from the Book Fair moved over to the new sim. The aim was to create a 24/7 book fair environment.
-
An even more successful Book Fairs followed in 2008 on this new sim which has grown in strength since its inception.
-
In 2009, Arton Tripsa (rl author, Jane Watson) became Island Manager. In 2010 the island's event program flourished with the arrival of Sandor Zabelin (rl author, Alexander M. Zoltai). The island  now has over nine regular events which attract many writers, readers and anyone interested in ideas, books or writing. Newcomer-friendly, we have a rich and tightly knit community which celebrates the written word and the friendships it engenders.
-