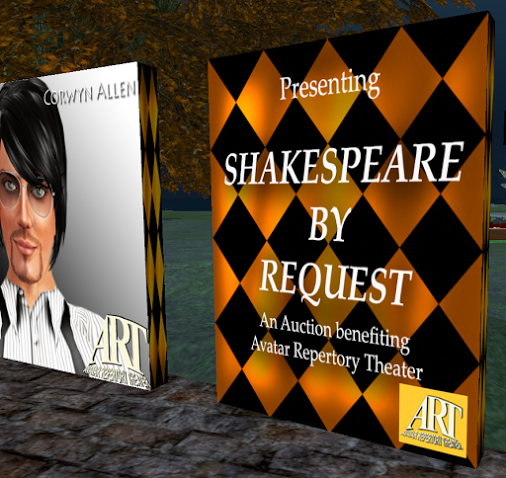 Cookie, Second Life – Since its founding in 2008, Avatar Repertory Theater has presented live theater productions and presentations featuring live voice acting in (c) Second Life.  As they move into their seventh year on the grid, bids are open on their first ever Shakespeare By Request

Auction.  From now until November 7th, visitors to the Company’s theater on Cookie can place bids on different members of the acting company for the chance to choose a command performance by that performer from the works of William Shakespeare. These performances will be presented at the Company’s popular “Plays Around” scheduled for Friday, November 21st at 5:00 pm slt.
Panels adorn the patio outside the Avatar Repertory Theater, with the image of each actor or actress whose performance skills are up for bid.  Once the auction closes, the winning bidders will have less than a week to choose their selection from the Shakespearean theatrical canon for that specific player to present.  Winners can be as specific or general as they wish in their request:
The setting will be simple, featuring Avatar Repertory Theater’s Shakespearean style performance space, which is often obscured by a variety of sets and settings for their biweekly ART Plays Around performances.
-
Bidding is open to all Second Life Residents.  Those who are less familiar with the company’s players can sample the company’s work at Plays Around performances scheduled for Friday, October 21st and November 7th, also at 5:00 pm slt.
-
Among the oldest artistic organizations of their kind, Avatar Repertory Theater’s mission is to bring diverse, live theater to a widening range of people through virtual performances, and to expand and challenge their own talents in the craft of acting using this unique media.  This has brought life to everything from first-time realizations of works by living playwrights, to major immersive productions such as their own adaptations of the classic Greek Drama Oedipus Rex (“Oedipus”) and the works of Lewis Carroll in "Alice in WonderSLand" and "Through the Looking Glass."
-
Proceeds from the Auction will help Avatar Repertory Theater continue to keep theater, performed live and in voice, a vital virtual presence.
-
Avatar Repertory Theater is a program of New Media Arts, Inc which has recently released its first Go Fund Me Video in support of their mission to develop graphical, theatrical, literary, educational, library and other fine and practical arts on the internet, in 3D graphical user interfaces, multimedia, new generation computing devices, and other electronic and digital communication media.
-
New Media Arts, Inc is a registered 501 (c) (3) tax exempt nonprofit organization in the United States, which can be reached at info@newmediaarts.org
Learn more about Avatar Repertory Theater at avatarrepertorytheater.org and follow them on Facebook and Google+.

Visit the UWA Challenge Gallery  to view the submissions so far:
List of Submitted Machinima for MachinimUWA VII: Transcending Borders:

Note:I am running some submitted videos in this blog, but only those posted on YouTube.  Vimeo sometimes removes videos and so ruins the post.

Mission:  Flying Saucers Return is a proof of concept project to demonstrate and document the feasibility of a plan to produce a video series in virtual worlds.  A video series requires, and the plan includes both the writing and the video production.    If the plan proves to be feasible, FSR may result in a commercial venture (thus separating from NMA, but with some of the same people.)   #FlyingSaucersReturn