-
As part of an American Museum of Natural History summer camp project, The Vesuvius Group created a tool in Second Life to help the youth easily create models of the Cretaceous Era fish they were studying and release them into an interactive underwater environment.  At one of its regular Friday meetings, TechSoup's NonProfit Commons in Second Life featured a presentation about this project by Jeroen Frans (Frans Charming in SL) founder of The Vesuvius Group.
-

For several years the American Museum of Natural History has had a 2 week summer program for teens in the 6th, 7th and 8th grade. In those 2 weeks the teens learn about the Cretaceous Sea Animals, and study the fossils that are available in the Museum.
-
Last year and this year they had a Building Kit to create Cretaceous Sea Animals. 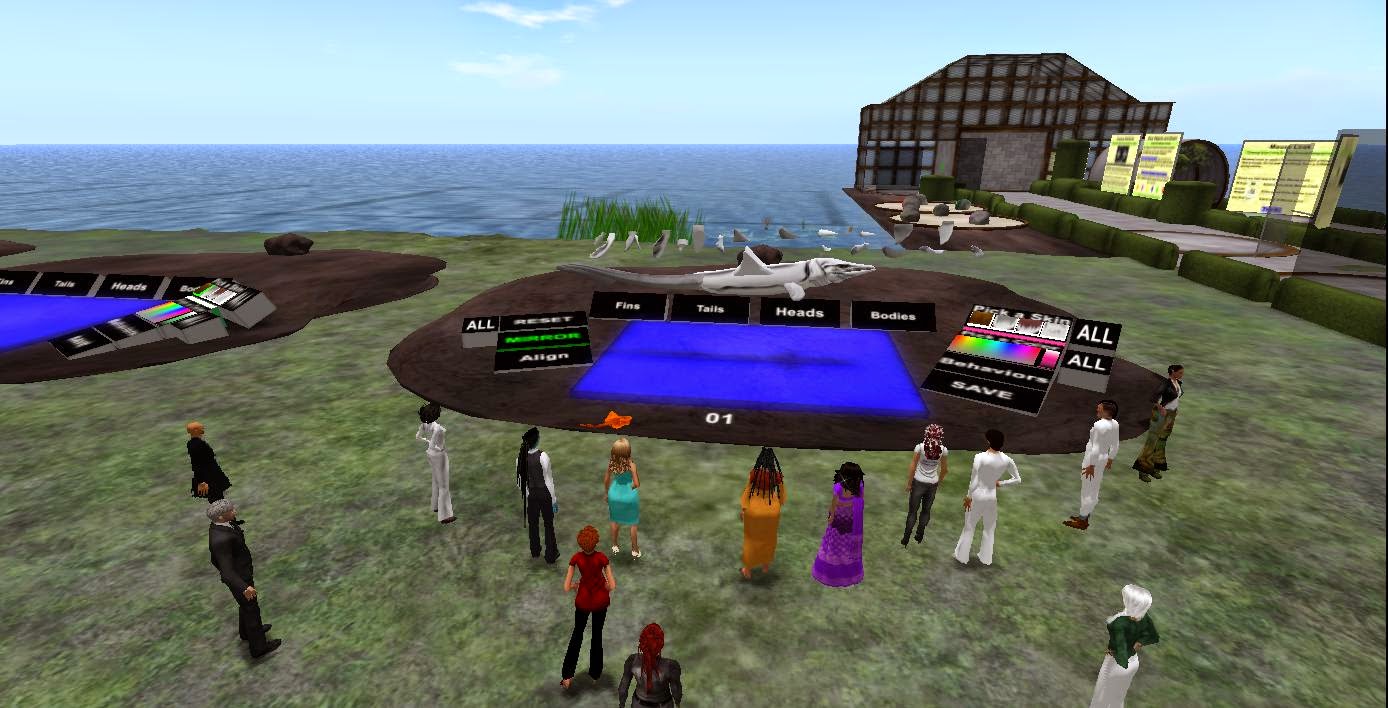 Part of the summer course is for the teens to learn about scientific modeling and create their own 3D model of the animal they studied. One of the digital tools they use is Sculptris,  a digital modeling tool, to create 3D models.  The AMNH also wanted the teens to model behaviors and see how the animals behave in a 3D environment. That is where Second Life comes in. To get behaviors, the animals had to be animated, with moving fins, tails, etc.
-
But the teens only have about 9 hours total to be in Second Life.  With that limited time, there was no-way the teens could make something ‘decent’ with prims.
-
So the Vesuvius Group created the Build Kit  to enable the teens to create complex animals by selecting parts and putting them together, selecting skin appearance, and specifying movements.
- 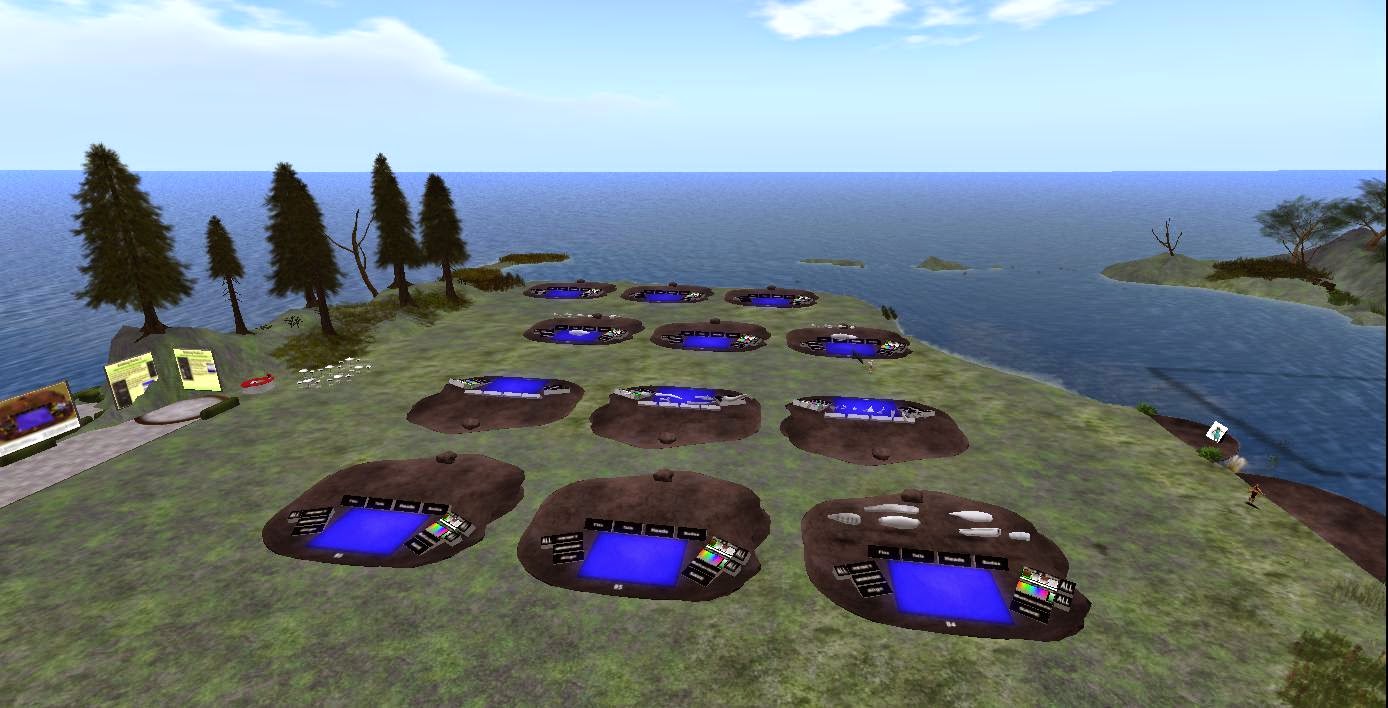 Build Kits for each team

To bring young teens into SL, they created their accounts through the Registration API, (RegApi).  That is a programming interface Linden Lab provides to make bulk accounts.  It has the option to lock avatars to a specific estate or sim, preventing the accounts from going anywhere else.
-
In this way Linden Lab allows you to bring in kids that are younger than 16 years old. These accounts, can’t go anywhere else, and can only search PG content. If you turn public access off on your estate, no one else would be able to interact with them.
- 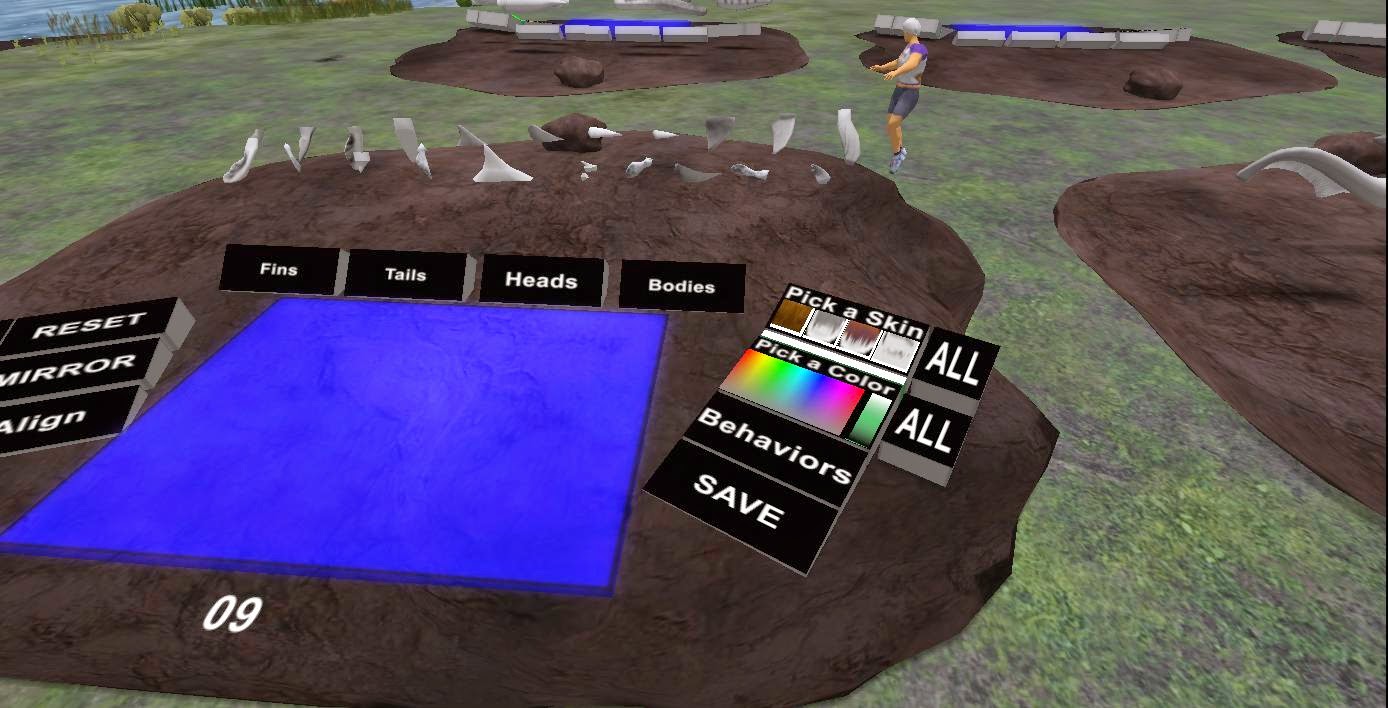 A Building Kit with some parts
-
- 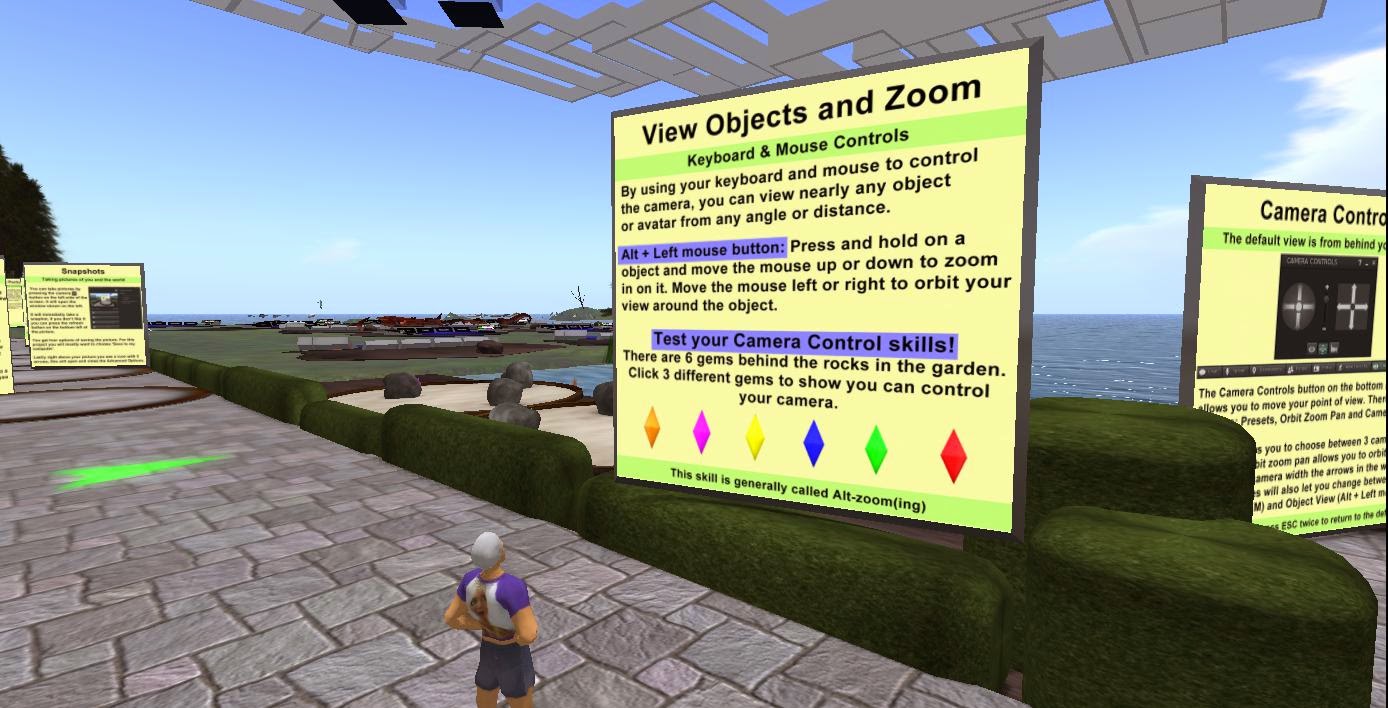 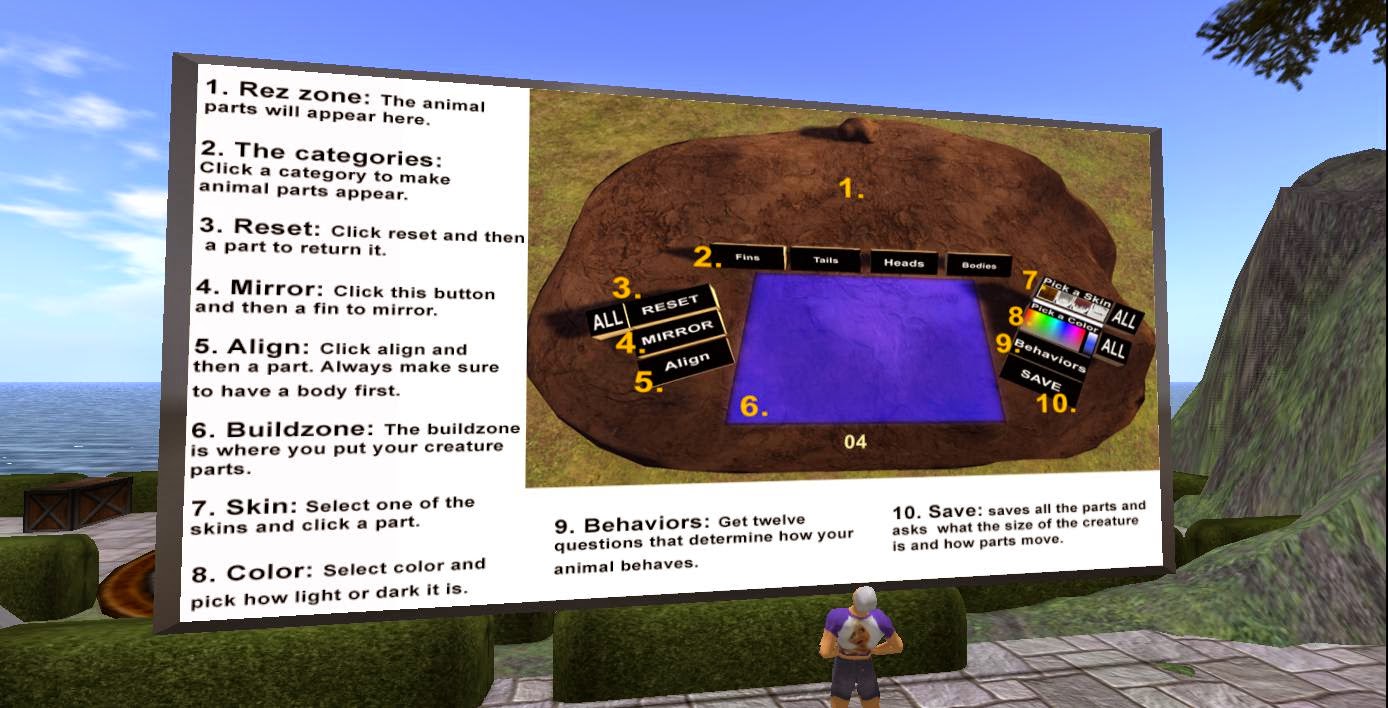 Instructions for the Build Kit
Click image to enlarge

The Vesuvius Group spent the most time with the teachers over the summer, before the summer program began. In 4 blocks of 60 to 90 minutes, spread out over June, July and August, they would took them through an orientation, and went over the Build Kits.

Conclusion:  It definitely pays off to spend the time on teacher training and to provide lots of instructional materials.
- 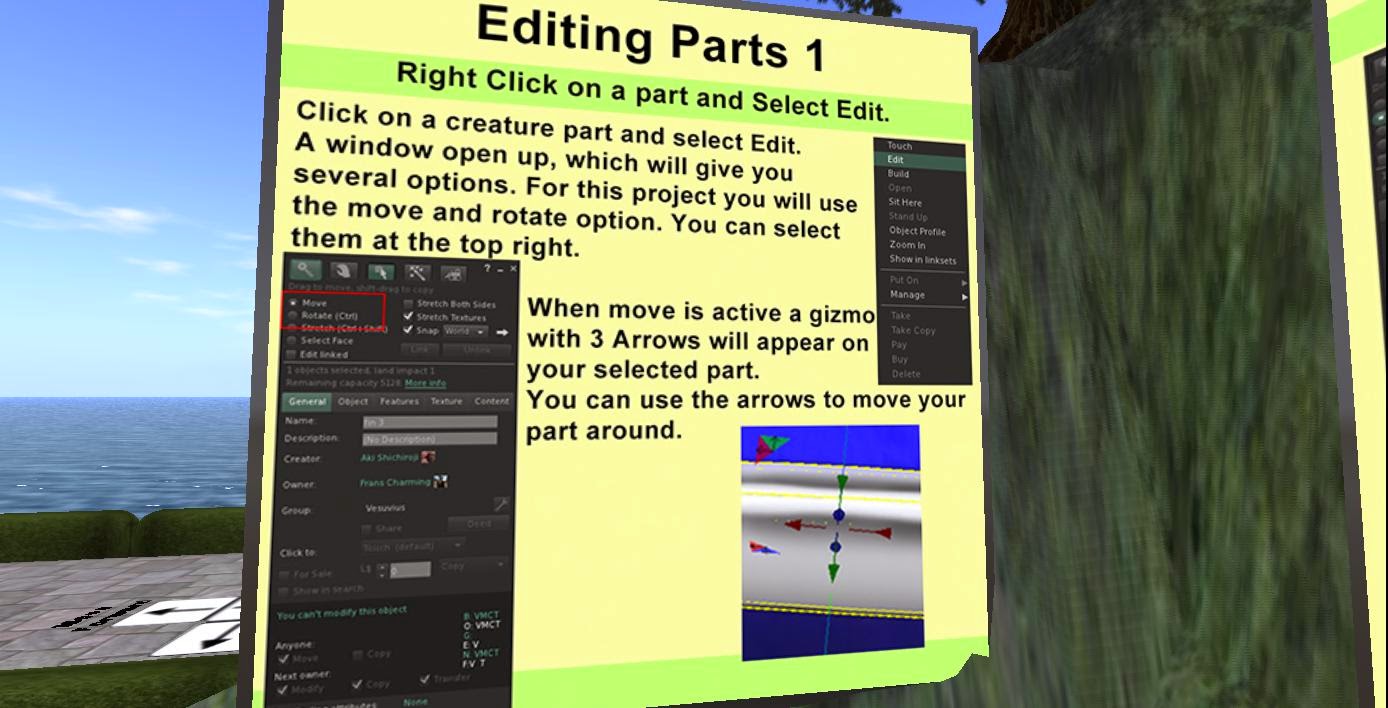 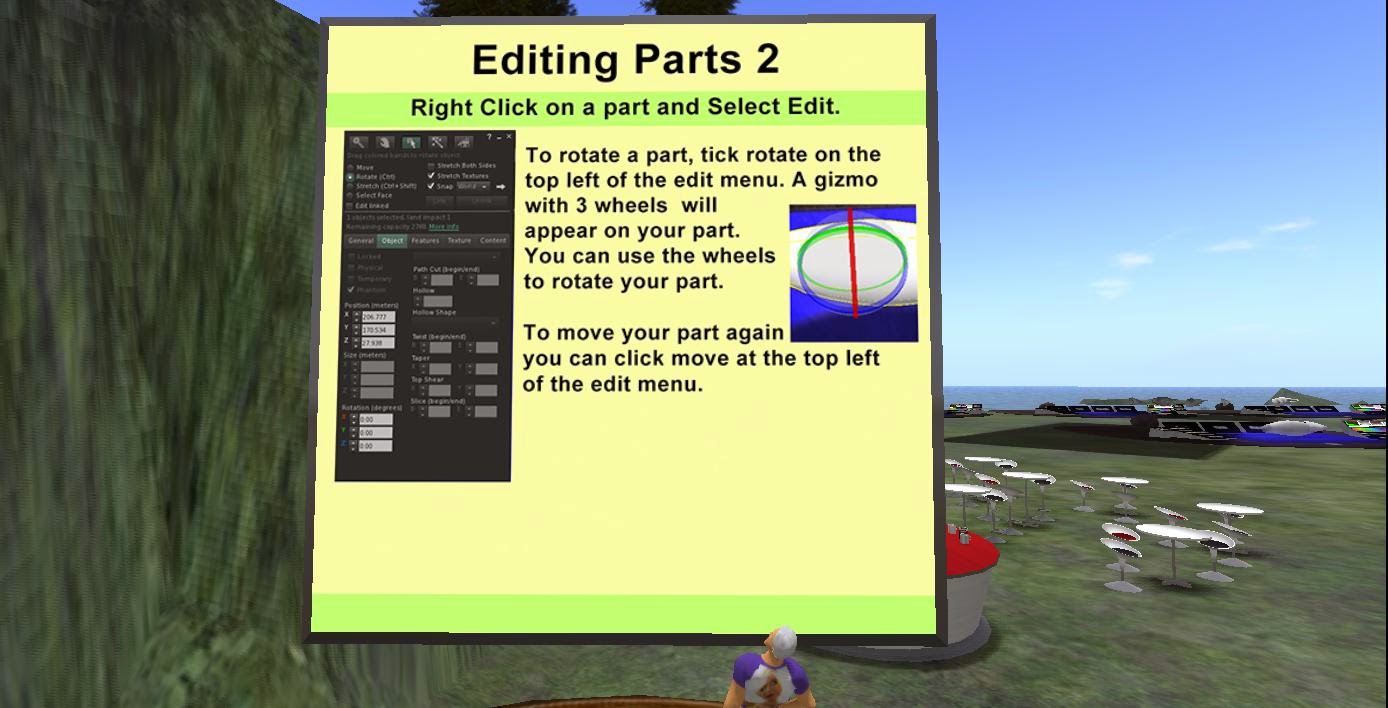 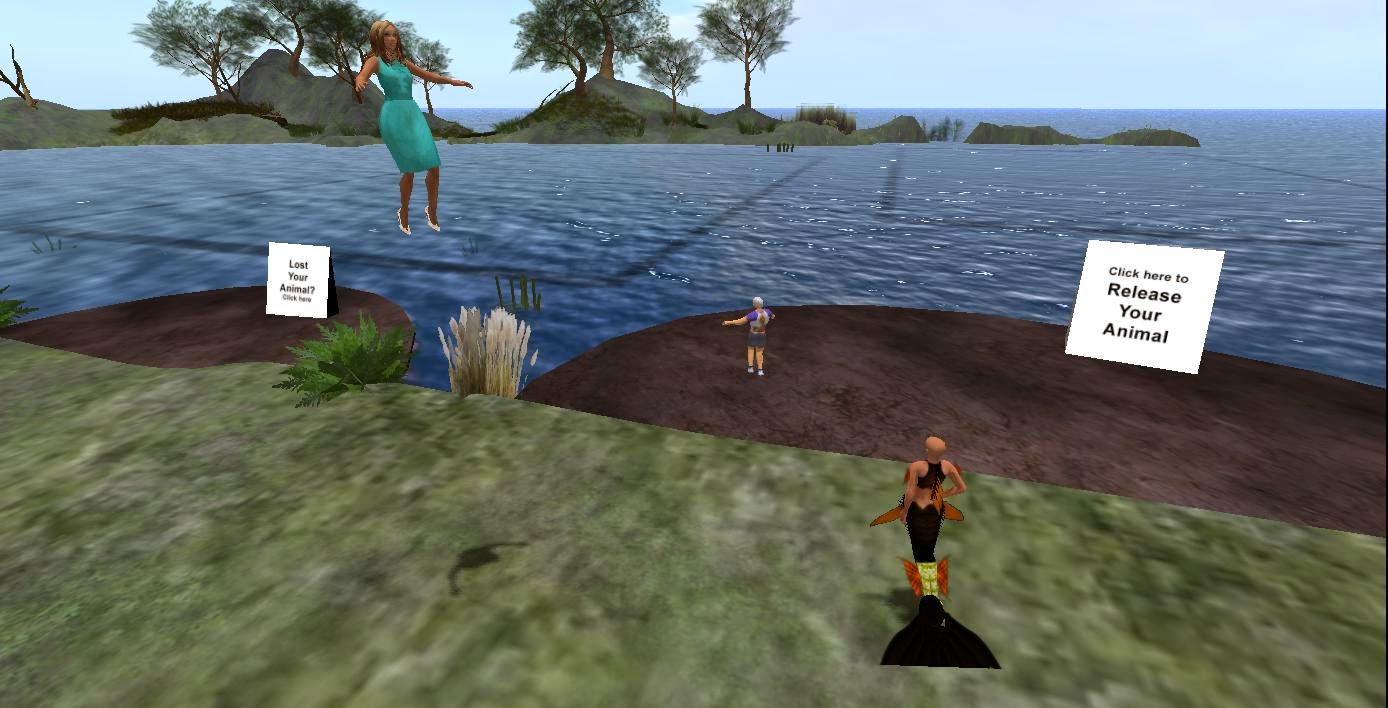 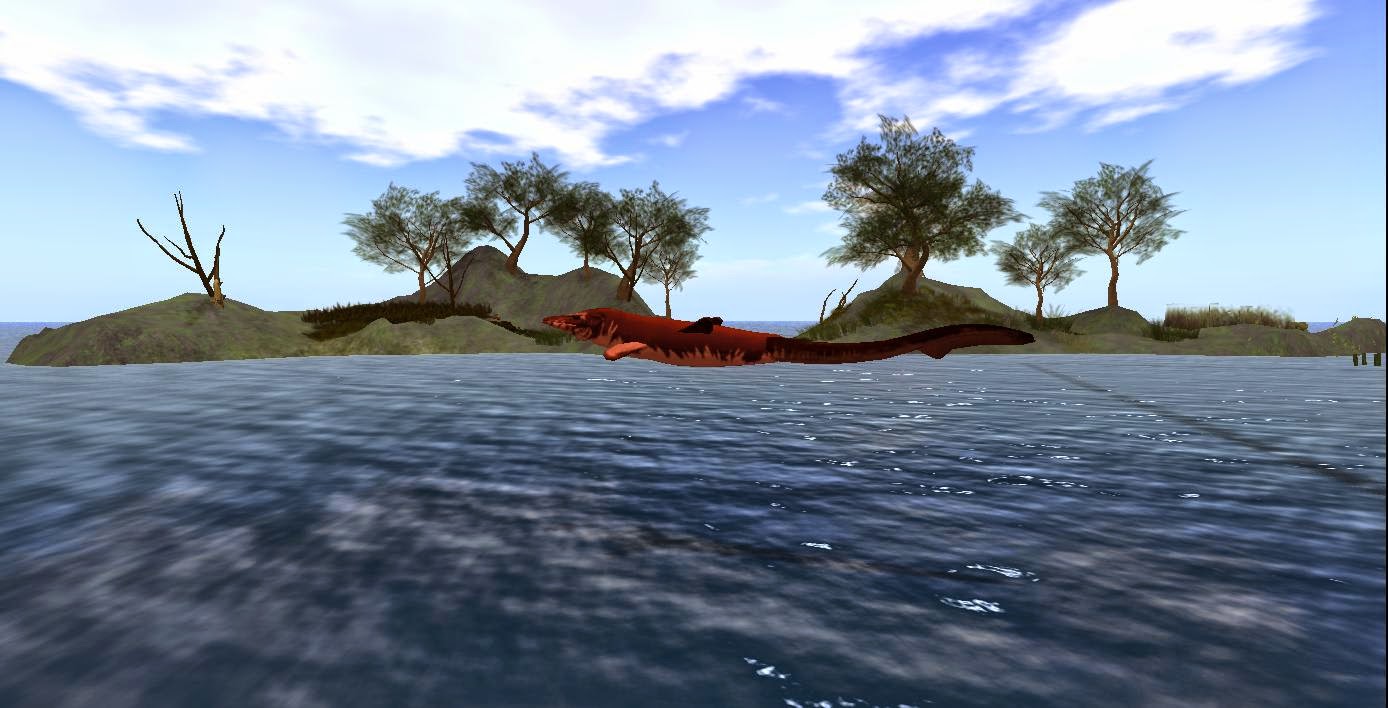 The animal appears in the air
-
The animal moves from the release point to a shallow area in the Cretaceous sea and dives in to start swimming with the fish created by the other teams.
- 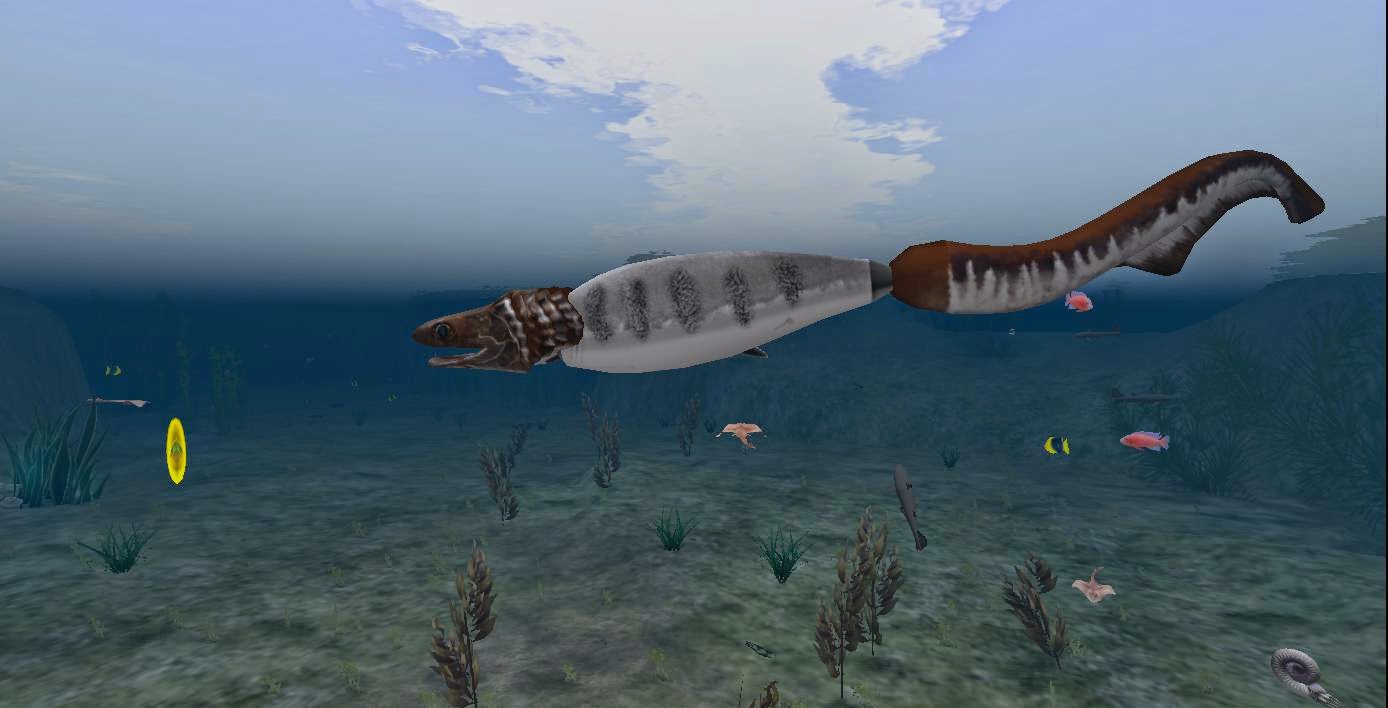 This one looks a bit improbable 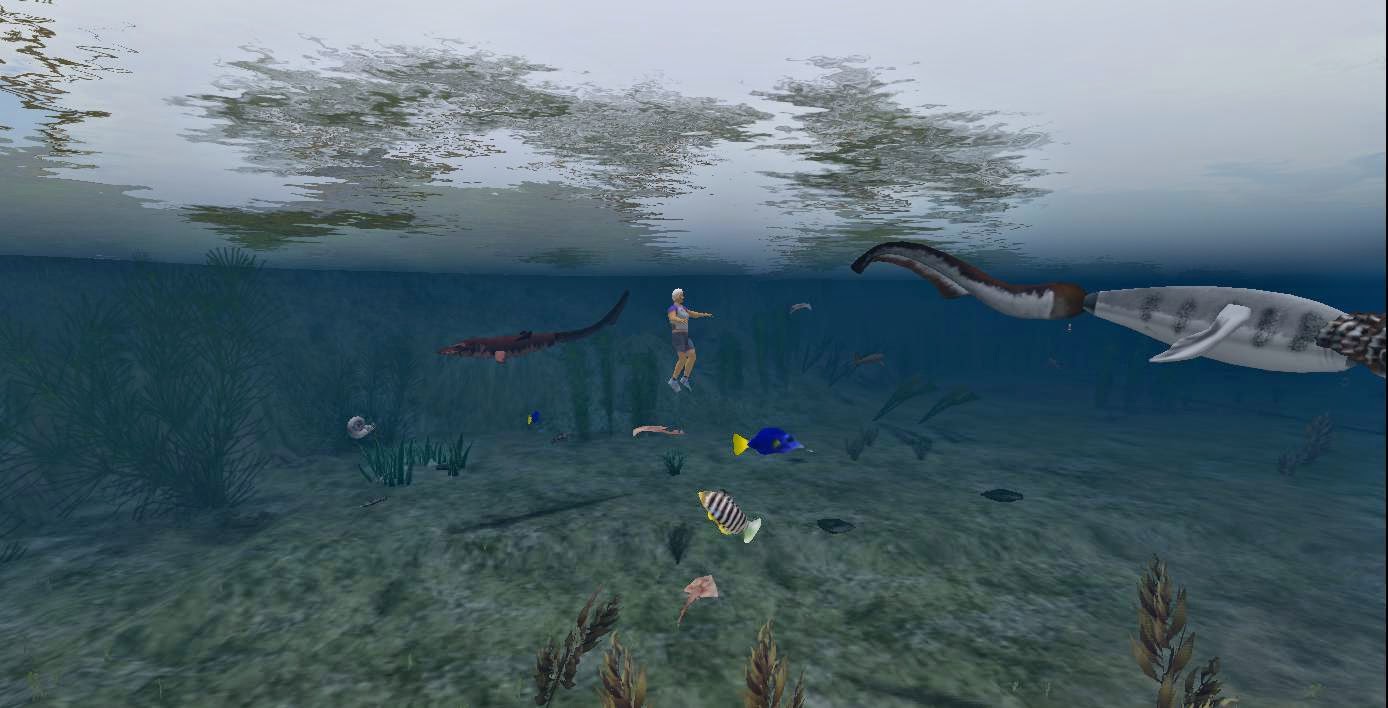 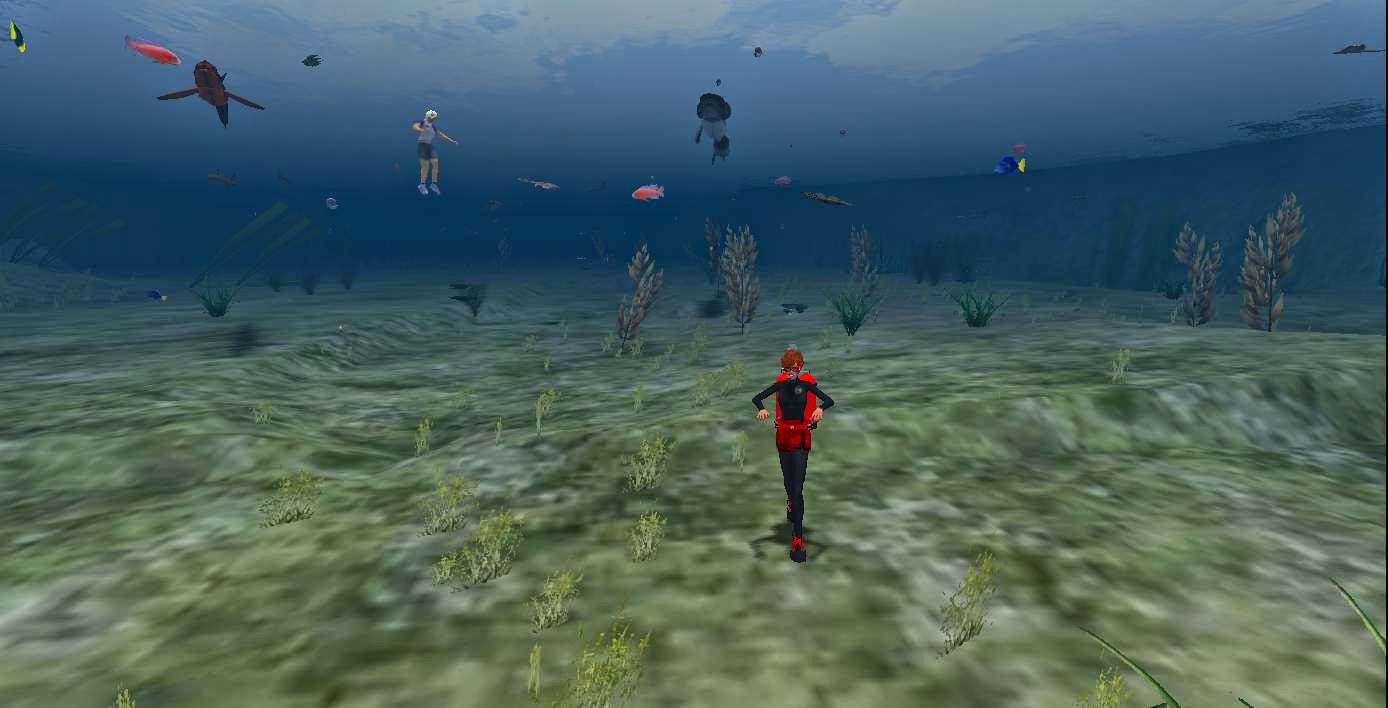 Visit the UWA Challenge Gallery  to view the submissions so far:
List of Submitted Machinima for MachinimUWA VII: Transcending Borders:

Note:I am running some submitted videos in this blog, but only those posted on YouTube.  Vimeo sometimes removes videos and so ruins the post.