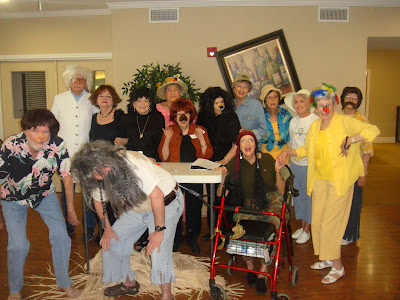 This post is not about virtual worlds.  At least not about those newfangled things that run through the internet pipes.  The connection to the new virtual worlds on the internet is something I expect in the future.  We do lots of stage plays and theater in Second Life.
This post is about a stage play.  A local production in The Vantage at Cityview.    That's the retirement facility where I live.

Yes, I really am 82. And I do see a long-range connection between the virtual worlds of the internet and the virtual worlds of local/community theater.  What we do in Second Life, for example, is much like community theater, except in a different kind of community.  And we get there to participate with no limitations from disabilities or age.  The situation is very compatible with the activity needs of a retirement center.
-
The cast (pictured above) is made up of residents of  the Vantage, as was most of the audience at the premier on August 19, 2011.  The play was directed and produced by Cholly Gordon, Program Supervisor.
-
The play is a comedy derived from The Island of Doctor Moreau, an 1896 science fiction novel written by H. G. Wells.
http://en.wikipedia.org/wiki/The_Island_of_Doctor_Moreau
-
The play script was obtained from Baker's Plays:
http://www.bakersplays.com/store/index.php
======================
Cast
She-wolf--a love-sick canine
Played by Dot Lehman
-
Thing from the forest--An "experiment" that got away
Played by Bob Smith
-
Sayer of the law--Once a black crow
Played by Bettye Baccus
-
Mail-Lady--Suspects nothing
Played by Dee Blakewell
-
Doctor Moreau--A mad scientist
Played by Sidney Soukup
-
Hedda--A faithful assistant
Played byTerri Banasik
-
Montgomery--An unwilling helper
Played by Barbara Dowdy
-
M'ling--A pekingese pup now in human form
Played by Fannette Sonkin
-
Kitty--A shipwrecked singer
Played by Roz Vaden
-
Shirley--A shipwrecked dancer
Played by Doris Klempnauer
-
Eddie--A shipwrecked traveller
Played by Kay Jones
-
Mrs. Van Dazzle-a shipwrecked society matron
Played by Lanell  Snow
-
Seal-Lady
Played by Dot Lehman
-
Ape-man
Played by Paul Jones
-
Bird-lady
Played by Roberta Bower
-
Cat Lady
Played by Mary Rollins

Email ThisBlogThis!Share to TwitterShare to FacebookShare to Pinterest
Labels: Note