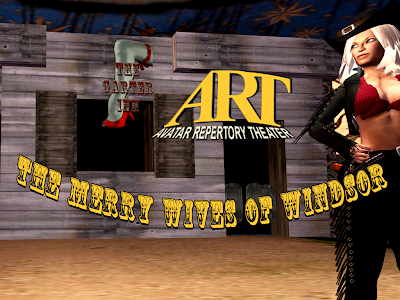 -
A doctor, a parson and a judge go into a bar... will they remember the punch line?
-
Will the lecherous Falstaff bed the luscious Alice and Meg before their husbands catch him?
-
Fighting for the hand of rich pretty Anne are a penniless aristocrat, a wealthy idiot, and a rapier wielding Frenchman - will the parson die?
-
Come see Shakespeare as only AVATAR REPERTORY THEATER plays it, THE MERRY WIVES OF WINDSOR in three parts, FRIDAYS, 5pm SLT, Sept 9, 16, 23 at the New Theater on Cookie sim.
-
Starring Kayden Oconnell, Madame Thespian Underhill, Pipsqueak Albatros, Rowan Shamroy, Elegia Underwood, Corwyn Allen, Caliban Jigsaw, Sodovan Torok, Sam Brautigan, Em Jannings, Dolgoruky Umarov. Adapted and directed by Ada Radius
-
http://slurl.com/secondlife/Cookie/201/206/21
-
Avatar Repertory Theater http://www.avatarrepertorytheater.org is a project of New Media Arts, Inc., a nonprofit organization tax exempt under IRC 501(c)(3). Donations may be tax deductible, depending on your tax jurisdiction and circumstances.
-
Comments by Ada Radius
Scheduling virtual world rehearsals and performances is the single most difficult challenge for Avatar Repertory Theater, with busy actors in six time zones – we’re lucky to get two rehearsals before our weekly shows, and for several of the actors, it will be just one.  Not everyone can make it to the performance dates for the three parts of Merry Wives, so there’s quite a bit of logistical shuffling.  But we all want to do more Shakespeare.  What to do?
-
Inspired by recent scholarly and theatrical publications on Elizabethan performance practices, and conferring with A.R.T. company member Darius Dubreyere, I went directly to Folio 1 and Quarto 1 facsimiles to develop this adaptation of The Merry Wives of Windsor.  Good thing I’m a fast typist, and that the actors are alert to finding problems quickly, as I am no scholar.  I am fascinated to discover that when the original spellings, punctuation, and line breaks are preserved in the actors’ scripts, how easy it is for them to do cold readings and prepare their parts with much less rehearsal time.
-
I encouraged the actors to find their own rhythms and accents with the speeches – some of the accents are specified in the play – bad French for Dr. Caius, and Welsh for Sir Hugh.  I didn’t want stiff “Received Pronunciation” British accents from our American actors, and none of our British actors use RP Brit in their ordinary speech either. Several of us discovered that southern, southwest and Appalachian accents nestled quite comfortably into Elizabethan rhythms, and that led to the visual interpretation – a cheesy Western stage and costumes.  It was just uncanny luck that our Scots-Canadian Sodovan Torok spent a few years in Wales as a teenager, and would have no problems with Sir Hugh.
Ada Radius