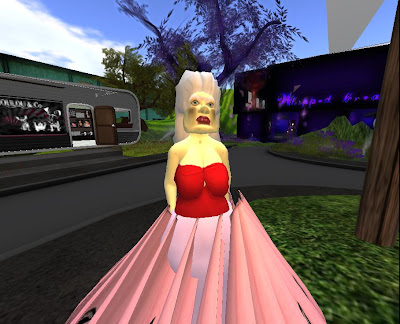 
of the New Jersey Sludberry's
-

The story this far
Another series:
The damned trailer park. Organized by Catboy Qunhua
One of our early steps in developing a series is to develop characters.  Develop means to describe the character and write a scene (not necessarily for use in the series) showing the special aspects of this character.
-
In our meeting last Saturday, I realized that I already had a character, Letitia Sludberry who could fit in the trailer park world.  I developed her for a different series, but the trailer park has more audience potential.   And if you know Letitia, you know what her choice will be.
-
Here I present Letitia's application for a place in the Damned Trailer Park.  The characterization script will follow soon.
-
Letitia lives next door to Older the Elder and his wife.  Letitia is pompous and pretentious.  She considers Older a slob and a drunkard.  She has a cat named "Pussy"  and talks fondly about her pussy.-Her husband, Richard, went out to buy cigars a few years ago and is late getting back.  She does not miss him.  She may sometimes reminisce about him: "If I had my Dick here you would not talk that way."-She is given to flights of imagination, particularly with the aid of brownies supplied by Bobby Lee Bates.  At these times. she often believes she is related to some important figure in history or current events.  She may speak with an obviously fake accident appropriate to the figure.    -Despite her disapproval of Older's drinking, she secretly drinks her glass or two of Madeira.  Sometimes she may be tipsy.  That may make her reading of otherwise boring material (like excerpts from a EULA) more suited to comedy.-She is proud of her collection of Chinese Amphorae, which she believes are ancient artifacts from one of the Chinese dynasties. Probably the Ping dynasty, as someone told her.   She usually refers to them as "my jugs" and offers to show them to visitors. "Would you like to see my jugs?"-Neither Older nor Letitia will notice the double entendre in the dialog.  A visitor may notice it with initial puzzlement and later embarrassment, and with an effort to change the subject or to insert clarifying language.