-
Yeah.  Like making sausage.  The Avatar Repertory Theater writers  have produced a comedy script.   Now, right in front of God and everybody, the Avatar Repertory Theater actors will give it a cold read.  Then the actors and the audience will offer comments.
-
Come to Art Plays Around on Friday, Nov. 2 at 5 pm SLT
http://maps.secondlife.com/secondlife/Cookie/199/199/21
- 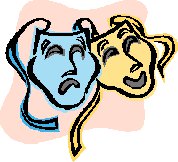 Then what?
-
Full disclosure: This script will not be perfect.
-
Perfect is future.  This script is now. Here, now, in this moment.
-

The story this far
Next step, come to Art Plays Around on Friday, Nov. 2 at 5 pm SLT
http://maps.secondlife.com/secondlife/Cookie/199/199/21

Episodes based on issues suggested by the movies, probably not resolved as in the movies.
Multi-part eposodes may be used to fit longer stories. Segments here would end in cliff-
hangers.
*******************
Dilana Llewellyn SWG (New)
Dilana is now looking over the collection of worlds to pick one.  If you have a world you
would like to pitch, try it on Dilana
-
Meeting Time: TBD
-
Status: Organizing, Developing world and characters
World: TBD
Characters TBD
**************
Comedy SWG (Doc Grun)
Doc Grun is heading up a specialized comedy writing SWG. This team will work over episode
drafts to add more comedy elements or to sharpen existing comedy elements.
-
Meeting time: not established. May be as called
-
Status: Current Tasks:
Review and add comedy lines to the draft of Circus series episode 1 (copies distributed.)

Ludo Merit is starting a new script writing SWG.  This SWG Will start with a focus on
schedule.  Ludo can fit a weekly meeting on a weekday afternoon (SL time).  That timing will
fit to European times. Ludo has not picked a series world yet, so if the time period might fit
you, maybe you want to suggest one to her.