Someday...we should rework the calendar.
Someday 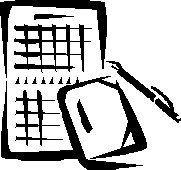 Have you noticed how many extra days the calendar has?  I don't mean the days with simple, boring numbers.  I mean days with special names like New Year's Day or Ground Hog's Day, or Yesterday.  Yesterday was celebrated by the Beetles.  You can't get more official than that.

The really great thing about Yesterdays is that we get lots of them.  The bad thing is they were never long enough for us to do what we needed to do.  We also get lots of Tomorrows. Tomorrow is very popular with Little Orphan Annie.

Tomorrow is just the opposite of Yesterday.  Plenty of time available in any Tomorrow.  We can put off anything till Tomorrow.  Tomorrow has an unlimited amount of time--until it becomes Yesterday.

And then there's Someday.  I've been thinking I should write an article about how much we need Someday.  And I told myself I would write it Someday.  So you are probably thinking today must be Someday.  But don't bother about all those things you were going to on Someday.  I actually finished the article a while back.   And saved it to post Someday.   So I got two Somedays this year.

Just think what it would be like if we made Someday a national holiday and put it right there on the calendar.  It would be just like Groundhog Day.  It would be celebrated on national television (what's left of it).  We wouldn't have old men in top hats, of course.  Instead, we would have average people showing the accomplishment they had been putting off until Someday.

Well, that plan didn't work out.  I'll have to think of another one--someday.