On Sunday, July 8th Seanchai Library embarks on a literary adventure with their summer series TEA TIME on the Orient Express.   The six week Orient Express series will  invite audiences into a custom created skybox setting complete with a train. 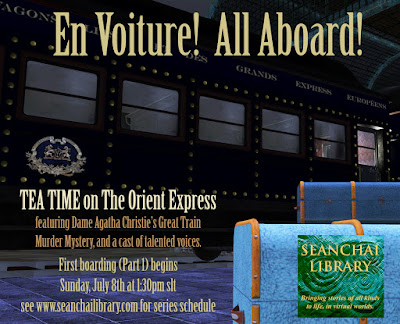 Second Life – On Sunday, July 8th Seanchai Library embarks on a literary adventure with their summer series TEA TIME on the Orient Express.  The Sunday afternoon "Tea Time" sessions are among the most popular the Library presents, known mostly for the nearly two complete circuits of the Arthur Conan Doyle Sherlock Holmes stories, presented in the Library's casual Fireside Room.  The six week Orient Express series will be an additional departure, inviting audiences into a custom created skybox setting complete with a train.  A special project page is available on the Seanchai Library website including details about Christie's great train adventure, video resources, and the slurl to the series location. http://irelandslstory.blogspot.com/p/te.html

Visit TEA TIME on The Orient Express at Holly Kai

The first session begins Sunday, July 8th at 1:30pm slt, following the circumstances leading to Poirot's presence on the train, and its departure from the Wagon-Lits Istanbul station.  The series will feature a cast of notable SL voices such as Avajean Westland and David Abbot, in addition to Seanchai regulars Corwyn Allen (as Poirot), Kayden Oconnell, and Aoife Lorefield; and Library friends Boudicca Amat and Bryn Taleweaver.  Audience and voice talent will be mixed together during sessions, adding to the experience.

Visiting the series site above Holly Kai Park will be of interest to many.  The Istanbul station setting will only be in place for the first session, and by the weekend of July 14th will have been transformed into the snowy mountains of Yugoslavia, where the balance of the story takes place in the snow-bound train.  The train will not actually be in motion at any time during the series, but there will be plenty of snow.

Murder on the Orient Express features Agatha Christie's Belgian detective Hercule Poirot. It was first published in the United Kingdom on 1 January 1934. In the United States, it was published on 28 February 1934, under the title of Murder in the Calais Coach. In addition to Christie's tale, the famed train has been depicted in numerous books, films including Graham Greene's Stamboul Train (1932) and From Russia with Love by Ian Fleming (1957).

All sessions will be live in voice.  A teleport from the Library's home parcel on Holly Kai will be available for those who get lost.  The schedule over the six weeks of the series varies slightly, to accommodate summer commitments. Interested residents are advised to review the schedule carefully, and check the Seanchai Library website for updates.

Articles in this blog