-
Watch on YouTube
-
Related
Objective: Promote the series "Flying Saucers Return" to possible collaborators and to the public.
-
Note:  "Flying Saucers Return" is the working title for a comedy series that parodies the flying saucer movies and other popular fiction/news of the middle of the last century.  We presently have a serialized draft of six episodes and are working on more.     Each episode will be about 23 minutes long, fitting  the standard length for a half-hour television show.
-
We hope to market this and other serialized comedies to web-based distributors, such as Amazon.com.  We believe that the low production costs in virtual worlds will offer a competitive advantage to the writing and video  production group we are organizing.
-
This writing/video production team is seeking more
Contact Selby Evans (Thinkerer Melville in SL)  if you are interested
-
Capture and editing resources
-
Video capture:  FRAPS
Comment: I have used FRAPS for years and find it to be problem-free.  It captures both video and audio.  The video capture is of the entire screen as seen by the viewer running FRAPS, so the only screen setting needed is on the viewer.
-
Screen and viewer settings
Audio from the computer running FRAPS is not captured.  That is convenient, since that computer will be run by the shot director, who may want to give instructions aloud.
-
Editing and distribution format: Camtasia
-
Camtasia offers features that make for efficient editing and production.  I did not use Camtasia for video capture because it does screen capture rather than video capture.  Thus I would need to select the viewer part of the screen for each shooting occasion.
-
Distribution format: .wmv
-
Video file sharing: Google Drive
-
Lessons learned
-
1. We need one shot devoted to voice capture and a second shot or second camera devoted to video capture.
2. The director needs 1 or 2 kibitzers to check the capture against the shooting plan.
-
3. The shooting plan is well worth the effort.  It makes for easy editing and video production.  A 7 minute video took no more than 3 hours to shoot and maybe 5 hours to edit and produce.

Details of the shooting plan

Cast
RICH Roundly:  Kayden Oconnell. Reporter, young man, good looking, well dressed, eager and a bit pompous.  A bit of an ass.   He speaks with exaggerated voice projection when he is on camera; otherwise he speaks with a voice high pitched and whiny.     He is here to interview the people of Immaculate Perception Trailer Park about the rumors of strange events there.  Rich holds a microphone in front of his mouth.
Animations: holds microphone in hand, moves it a little
LETITIA  Sludberry:   Rowan Shamroy (Existing avatar). Aged lady of pretentious appearance and behavior.    As in Episode 1:  Holds Pussy-in-box.
Rowan has Pussy-box from Catboy (Check)
Rowan has Letitia avatar 4 (Check)
Animations: holds up pussy in box on cue
Indestructible AUTOMATRON: Large Robot.  Nickname: Otto. No lines, only action.  Carrying Microwave, walks from behind trailer to Microwave stack, stops at 129/147/27, facing microwave stack, drops microwave, walks back.  Repeats later.  Available.   NOTE, whoever performs this avatar will need to remove any AO, to avoid conflicts with the Robot’s scripts.    Shot 3
MAMA: (Missus Beauregard )  MadameThespian  Small, thin lady in pink house-robe and pink bunny slippers. Take charge person, dominates the scene when she starts speaking.   One major speech near the end of Promo 1)
LARRY  Cameraman:  Tymmerie Thorne  Clearly female. Has camera on shoulder, always looking into the eyepiece.  A few lines.
Animations: Waving wildly with non-camera hand
************
Cut shots
(for covering cuts)
1.    Sign:  Immaculate Perception Trailer Park
2.    Letitia: On her interview mark, lifting and showing  the Pussy box.  (Cat snarl)
3.    Letitia: On her interview mark, lifting and showing  the Pussy box.  (Cat snarl)
4.    Letitia: On her interview mark, lifting and showing  the Pussy box.  (Cat snarl)
5.    From behind LARRY, with camera, Rich, Letitia, Microwave stack in background
6.    Seeing LARRY from front , Rich, Letitia in foreground
7.    Front of Laundromat
******
Scene
Background: Sky prim
1.    North (in place)
2.    South ( in place)
3.    No shots east or west – not part of the set
*********
Props
Trailers (in place)
Microwave stack (in place)
Camera for LARRY (available)
Hand wave for Larry (available, to be tested)
Microphone for Rich (available)
Pussy box held by Letitia
******
Effects
Green sky on cue (in place)
******
Marks for characters
The marks for the actors were set with transparent squares, invisible to the camera but visible to the actors with Ctrl+Alt+t set.  The squares carried floating text of the names, also invisible to the camera when the UI is off (Ctrl+Alt+F1).
-
The the actor positions were also marked with Faux People (near trailer door) for initial shot composition.
- 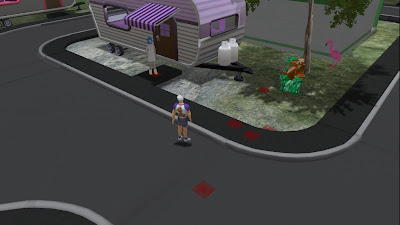 **********
Shooting notes
-
Actors note:  We will pause the action as needed.  On pause, stop action and dialog, but hold position.   Use voice as needed – the pause will be cut from the timeline, so the only important thing is hold position.
-
As director, I will also capture video.  I may speak to give direction, but my voice will not record.  So give no hint that you hear me.
-
W don't need dress rehearsals.  I will record all performances, and may use a video or voice clip from any recording.
******
Video-Machinima