Da5id Abbot, Corwyn Allen, Shandon Loring, Elrik Merlin, Kayden Oconnell, Caledonia Skytower, and Votarn “VT” Torvalar will come together to present the script, adapted by Skytower and Abbot from Stevenson's original novella.  The performance will be live on stream at Pixeltrix, and simultaneously broadcast on Fantasy Faire Radio. All residents are welcome to be part of the in-world “studio” audience at http://maps.secondlife.com/secondlife/Pixeltrix/162/127/21


In a literary career studded with noted and beloved works, such as Treasure Island and Kidnapped, Scottish author Robert Louis Stevenson’s all-time bestseller was the novella The Strange Case of Dr. Jekyll and Mr. Hyde. “Novellas” are generally defined as ‘long short stories, or short novels between 17,500 and 40,000 words in length.”  Stevenson’s 1886 work brought reading audiences something unexpected and entirely unique. The novella's impact is such that it has become a part of the language, with the phrase "Jekyll and Hyde" entering the vernacular to refer to people with an unpredictably dual nature: usually very good, but sometimes shockingly wicked. 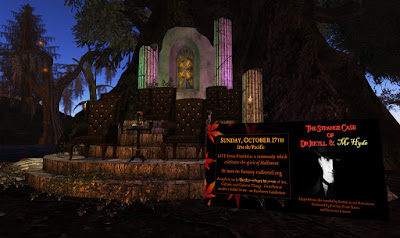 The book was initially sold as a paperback for one shilling in the UK and for one dollar in the U.S. These books were called "shilling shockers" or penny dreadfuls. Within six months, close to forty thousand copies were sold. As Stevenson's biographer Graham Balfour wrote in 1901, the book's success was probably due rather to the "moral instincts of the public" than to any conscious perception of the merits of its art. It was read by those who never read fiction and quoted in pulpit sermons and in religious papers. Despite being initially released as a low-budget publication, it was an immediate success and became one of Stevenson's best-selling works.

The Strange Case of Dr. Jekyll and Mr. Hyde on Fantasy Faire Radio is sponsored by The Ravenheart Museum of Art, Culture, and Curious Things: displaying among the largest public collections of decorative Libertine Eggs by Alia Baroque and currently featuring the exhibition “A Conspiracy of Ravens.” Visit them at number 5 Siddal Street – on Rosehaven Laudanum.

Since 2014, Fantasy Faire Radio has been a special event station, sponsored by Radio Riel in its role as Media Partner in Fantasy Faire, the annual celebration of fantasy art, writing, design and creativity that raises money every year in the virtual world of Second Life for the American Cancer Society’s Relay For Life, supporting cancer research, caregivers and cancer sufferers all over the world. In 2017, FFR began broadcasting 24/7, as a full-time internet radio service. Listeners can tune in by opening https://radioriel.org in their internet browser and choosing FANTASY in the top menu, or by opening http://fantasy.radioriel.org in a network audio player.


About the Seanchai Library

Seanchai Library (Shawn-a-kee, which means "Storyteller" in Irish.) was founded in March of 2008 in Second Life. The program remains dedicated to promoting the power of stories to transform and inspire through live voice presentations: "We bring stories of all kinds to life, in Second Life and other virtual worlds."  http://irelandslstory.blogspot.com/