Part 1 of a talk given by Dr. Valerie Hill, Dr. Marie Vans, Alyse Dunavant-Jones to the Nonprofit Commons in Second Life.  Part 1 reviews the history of libraries in virtual worlds. 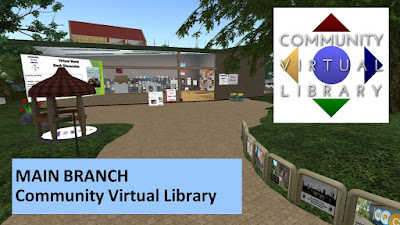 
History of Libraries in Virtual Worlds

In 2003, the place we know as Second Life opened and librarians immediately saw the value of the platform for immersive learning and global connectivity. By 2006, the Alliance Library System was looking at Second Life as a way to provide some library services to a new generation of users. Many of these users are those comfortable with looking for information on internet and want the added convenience of not having to leave home to get it.
-
In 2007, the first major Second Life library was born, the Info Archipelago, which had almost 40 islands associated with it. And when half an island was offered to the American Library Association, the ALA also opened a space in 2007. In 2011, Linden Labs discontinued the Educational discount that the libraries had enjoyed up until that point and the increase in cost meant that many institutions closed down their spaces in Second Life. And, while the ALA may have lost their virtual space, and the Info Archipelago greatly reduced its footprint, many librarians never gave up on virtual worlds as a platform for remaining relevant in a digital world. They managed to maintain a presence in Second Life as the Community Virtual Library.
-
The Community Virtual Library is the piece of the Info Archipelago that still exists and has recently seen a resurgent interest in using virtual worlds for collaboration by the ALA.

Librarians have been in the forefront of using virtual worlds, both for delivering digital library services but also for teaching. There are several virtual worlds today that librarians are involved with. Second Life is only one of those, albeit the most populous one. It was also the first Open-Sim based world to open, the beta of which was in 2002.
-
Today (as of April, 2017), there are over 49 and a half million residents. This number is a little misleading, as many people have more than one avatar. There are also close to 24,000 regions and residents can buy virtual goods either inworld or on the Metaverse's largest on-line market.
-
Probably the biggest drawback to Second Life is the cost. This slide shows just how expensive it really is…although it is cheaper for libraries now that Linden Labs brought back the educational discount.
-
The main library in Second Life is the Community Virtual Library (CVL). Many of the librarians associated with CVL have been in Second Life since the Info Archipelago established a presence here.  Many traditional librarian services are provided there like a staffed reference desk, rotating exhibits, and even a book club. Non-traditional activities that would not even be possible in the real world, such as teleporting to different worlds can also be found there.
-
The vision for CVL is to have "Virtual spaces for learning, resource-sharing, and exploration.
And CVL is the hub that connects digital citizens in virtual worlds with the information and resources they seek."
- 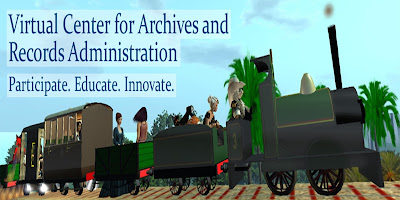 -
Another example of a space in Second Life run for and by librarians is VCARA, or the Virtual Center for Archives and Records Administration.
-
The ISchool Island itself has been around since 2007 and is run by the San Jose State University, iSchool. VCARA was established in 2009 as a space for librarians and archivists in training. The mission for VCARA is to "Provide virtual space and resources for those interested in any aspect of information science including archives, education, libraries, records, and special collections in order to communicate, collaborate, and exchange information; showcase accomplishments; educate; and innovate outside of the formal classroom structure. CVL and VCARA are two examples of virtual spaces run by and for librarians in Second Life.

Another virtual world with a library is Inworldz. Inworldz opened in 2009 and is significantly smaller than Second Life in terms of users and regions.Many of the residents in Inworldz left Second Life because of the prohibitive cost. Inworldz is very cheap compared to Second Life. And not just in terms of money, but in number of allowed primitives as well.

-
The Sendalonde Community Library was established in 2011 by Alexina Proctor and Prax Maryjasz, librarians who moved from Second Life to Inworldz. The library focuses mainly on community interests such as Fantasy, Sci-Fi, and Folklore. In addition to a reference desk, exhibit halls, and book collections, Sendalonde has a separate theatre building for plays and lectures. A branch of the Seanchai library can also be found on the grounds of the Sendalonde community library. In addition to a presence in Inworldz, Seanchai can also be found in Second Life and Kitely. Having a venue that focuses on storytelling is a perfect match for any virtual library and Sendalonde is no exception. 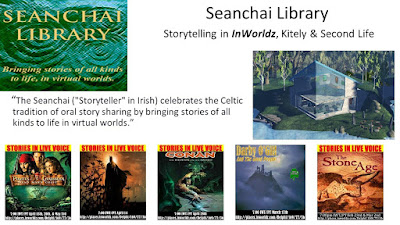 Kitely is yet another virtual world that hosts several libraries. Kitely is bigger than Inworldz, but smaller than Second Life. It is also much cheaper than Second Life and Inworldz.
The biggest difference between Kitely and other virtual worlds is that it uses an "On-Demand" model, which means that a world is not actually persistent like they are in Second Life and Inworldz. The only time a world exists in Kitely is when someone is actually there.  This makes it cheaper because the vast majority of the worlds are only being visited a fraction of the time in a 24 hour period, so server space can be reused for different worlds.
-
Metaverse Libraries is a space in Kitely which houses branches of libraries from across the Metaverse. Metaverse Libraries is the brain-child of three librarians which came about as a result of wanting to find a space that highlights the existence of libraries and librarians in all virtual worlds. This  4-region space houses a branch of CVL, the Sendalonde Community Library, VCARA, and a special library for a space for a special library from the PashionTech - STEM4Girls island.
- 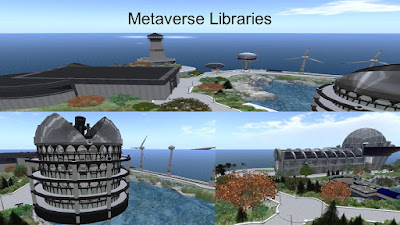 -
PashionTech  is an island in development  for K-12 teachers to learn how to encourage girls to consider STEM (Science, Technology, Engineering, & Math) careers.  Part of that effort includes a library with resources for teachers, librarians, and even kids. While the focus here is on education, since there are extensive resources in the library, a branch of this special library belongs on Metaverse libraries as well.

Moving Toward the Future

Predicting the future of virtual worlds like Second Life is impossible, as virtual reality headsets enter the mainstream and augmented reality is also on the rise.  Recently, the potential for education was illustrated at the SL MOOC 2017.
-
SLMOOC17 June 16th Metaverse Libraries Connecting Communities as Resources
-
-

We all can feel overwhelmed with the complexity of juggling technology tools.
But TOGETHER we can find best practices in virtual worlds – not alone in isolation.
-
Librarians serve people who need information.  So, as virtual world librarians, we ask:
What information needs can be best served in a virtual world?
What can we offer virtually that cannot be delivered physically?
Looking toward the future, it will be important to explore worlds beyond Second Life. Although the main HUB of virtual world libraries continues to be located at the Community Virtual Library in Second Life, librarians working in virtual worlds now realize that building a virtual community resource network is essential as virtual spaces continue to evolve.