Can't be done?  Well, streamcasting does it.  If you want to see,  go to:
-
http://www.livestream.com/TheVirtualShortPlayBuffet
- 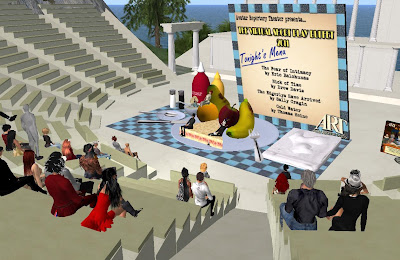 -
This is a series, and the ART players hope to have it streamed live every Friday at the same time, 5 to 6 pm California time.  So come back next week if you want to see how it works.
-
I watched both sources on this opening occasion.  The sound and video were fine.  There were occasional interruptions for commercials, but surely nobody  who still watches television will complain about that.
-
On this occasion, the sim had about 32 people and the live stream had about 17.  Total of 49.  50% increase in audience.  But the live stream has no tech limits on audience size.  So don't listen to those who say that Second Life is limited because you can only get 50 people on a sim.  What is limited there is the vision of the people who can't think outside of the viewer box.
-
The viewer experience on the live stream was much like the experience in the Archon Theater where the show was presented.  There was a live chat next to the video, but not much was said there or in the local chat at the archon.  I guess the plays held the attention of the audience.
-
I did not even have an opportunity to see if the livestream had less chat-lag than the standard chat-lag of Second Life. But I suspect it does.
-
So the technology is here to bring people to an event in Second Life with no special learning curve.  If they know how to watch video on the web, they know how to watch Second Life on the web.  And we can stream to thousands. That's well established technology.
-
"Yes- but it costs money."  So it is an economic issue.  To cover the costs of streaming to a large audience, we need to get revenue.  Actually, there were ads on the streamcast, presumably covering the cost of the present "free" service.  But a large number of listeners is just what the old, ad-supported media wishes it had.
-
The ads are not well placed to suit the presentation.  But if we had our own ads, we could place them as we please.  In this buffet format, we have short plays and could easily put ads between the plays.
-
Lets check our resources:
What else do we need to build a virtual theater/video district in Second Life?
============
Gamification
The Buffet even has the beginnings of gamification.    Prizes in Lindens.  Even more, rewards of far greater value to a playwright.  Publicity and production.  The best plays will go to full stage production in Second Life.  They will probably be streamed on the web, too .  That means everybody can watch.  Even your grandmother.
-
If they plays are streamed, the playwright will probably be able to get a video copy for reuse.  Maybe turn in in as a project in writing for the theater.
-
Gamification Strategies & Virtual Goods: What Works and What Doesn't
-

Email ThisBlogThis!Share to TwitterShare to FacebookShare to Pinterest
Labels: HLP