2013 STAGE: THEATER: The Gospel according to Bowser (Script)

The Gospel according to Bowser
(Script)
- 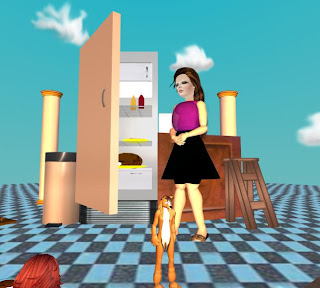 The Gospel according to Bowser

-
SCENE ONE
Morning. A modest kitchen. Yawning,a MAN, early ‘30’s, in a robe,enters. BOWSER , the family dog, lying on the floor, rises and stretches.
-
BOWSER  addresses the audience throughout, except for his exchanges with other animals.
-
BOWSER: That’s the Master. Omnipotent. Omniscient. Omni-you-name-it. Everything you expect from a God. And then some.
-
(The MAN turns on the light.)
-
MAN:  Hey, Bowser! Hey, boy!
-
BOWSER:  Notice how he changes night into day with the flip of a paw? In my Master’s house, miracles are as common as fleas. Sometimes when he feeds me, he turns water into gravy.
-
(The MAN rubs BOWSER  vigorously)
-
BOWSER:   My name’s Bowser. My job is fetching a ball, guarding the house, barking and running in circles when the Master comes home and other displays of worship.
-
MAN:  (calling groggily)  Honey, are we out of coffee?
-
BOWSER:  The Master is preparing his morning sacrament, a holy drink that provides him
with many of his powers -like alertness, strength and speed. I tried the sacred
liquid myself, but it just made me have to pee. Obviously not meant for mortals.
-
WOMAN (O.S.):  (calling from another room)  I got some yesterday. Look in the fridge.
BOWSER:  This is where it gets complicated. That was the voice of the Master’s Mate -a goddess, of course.  She often has more power than the Master, sometimes, with only a harsh sound or a sniffle, causing him to spring into action.  I don’t pretend to understand. It’s a divine mystery.
(The MAN looks in the refrigerator.)
BOWSER:  He’s opening the Tabernacle. Within that holy receptacle are food and drink and mysterious potions. Time stands still in there. Substances that would rot to a delicious state in only a day or two take weeks inside the Tabernacle. Sometimes months. I believe it’s a link to immortality.
(The WOMAN enters the kitchen.)
WOMAN:  The toilet wouldn’t stop running again.
BOWSER: I’d give my right haunch to know what they’re saying. To be in the company of Gods, to hear their mystical incantations, and not understand is almost too much too bear.
MAN:  Did you jiggle the handle?
WOMAN: Yeah, but that didn’t work. It’s making a strange noise.
(She makes GURGLING-LIKE SOUNDS.)
BOWSER:  Here’s how it all began -Genesis. In the beginning was the word. And the word was “No!” The first dogs, Rover and Queenie, lived in a paradise, a home abundantly supplied with milk bones and jerky strips, where they were free to sniff each other and drink out of the toilet 24/7.
WOMAN: Did you check the trap this morning?
MAN:  Yeah. Nothing.
BOWSER: There was only one restriction -a beautiful white sofa -the couch of good and evil. But Queenie was proud.  She convinced Rover to chew up one of the cushions. Discovering them, their Master condemned them with the terrible words that have doomed us ever since -“Bad dog!”
WOMAN: I just hope we don’t have another rat in the house.
MAN:  I know. Me, too. But we caught the one. Maybe that was it.
WOMAN: I don’t know. They’re pretty wily. And filthy.
BOWSER:  The next day, Rover and Queenie were banished to a place called the Pound.  Ever since, all dogs have paid for that original transgression. We must live in an imperfect world. We have to endure fleas, ticks and heart worms ... wear collars and choke chains. And, for some reason I’ve never understood, we have to periodically eat grass and puke. (squirming uncomfortably) Hope the Master lets me out soon. I’ve got to whiz like a Doberman.
MAN;   Come on, Bowser. Let’s go outside.
(BOWSER:  follows the MAN to the door.)
BOWSER:  What did I tell you? The Master is all-knowing.
(As soon as the MAN and BOWSER exit, the seven-year-old DAUGHTER enters,  followed byPUSSUMS the cat.)
WOMAN: Good morning, sugar. Have you named her yet?
DAUGHTER: Yes -Pussums.
(Hearing her name, the CAT PURRS and approaches.)
WOMAN:  Must be pretty smart if she already knows her name. (beat) I hope she can keep mice and rats out of the house.
DAUGHTER:  What about Bowser? Don’t dogs hate cats?
WOMAN: We’ll see.
(The back door slams, and BOWSER enters. As soon as PUSSUMS sees him, SHE hisses, and HE responds
with a low growl)
BOWSER:  Who are you?
PUSSUMS: Who wants to know?
BOWSER:  Me.  Bowser. First chosen -first anointed.
PUSSUMS: What the hell does that mean?

MAN; Oh, oh ... rockystart.
DAUGHTER; I’ll pet them so they’ll know we love them both.
MAN: Good idea, sugar.
BOWSER: It means I was the first one chosen by the Gods ... and ordained as their disciple.
PUSSUMS: Gods? What Gods?
BOWSER:  What Gods? These three -in the room with us.
PUSSUMS: You outa your mind? You talking about the zoo keepers here?
BOWSER:
How dare you blaspheme!
PUSSUMS: Blaspheme? Don’t be such a putz. Just because they feed us and can turn a door knob doesn’t make them gods.
BOWSER: I feel sorry for you, heathen.

PUSSUMS:  Likewise, kibble breath. (eying him closely) These are the only humans you’ve ever lived with, right?
BOWSER:  Yes, but I don’t see what that has to do-
PUSSUMS: Well, I’ve known a lot of them. Especially at the Pound-
BOWSER:  The Pound! You were at the Pound? But that’s where all the bad animals go.
DAUGHTER: I think they’re gonna like each other, don’t you?
WOMAN:  So far, so good.
PUSSUMS: You don’t know what you’re talking about. You’ve never been to a Pound. But I can tell you - for some of us, it’s a place of refuge -usually from these so-called gods of yours.
BOWSER:  You keep thinking like that, you’ll rot in hell.
PUSSUMS:  We all gotta rot somewhere.
BOWSER:  You maybe. When I die, I’ll have eternal life and be reunited with the Master in heaven, where I’ll chase quail and jackrabbits across the Elysian Fields.
PUSSUMS:  Bully for you. (sniffing) You smell something?
BOWSER:  Just the Lord’s morning breath.
PUSSUMS:  Not that. (beat) There’s a rat in here.
SCENE TWO
Night. The kitchen.
As BOWSER  lies on the floor, asleep, PUSSUMS creeps in.  Bowser is immediately aware of her.
BOWSER:  What are you doing?
PUSSUMS:  Patrolling. Reconnaissance.
BOWSER:  That’s my job.
PUSSUMS:  You must not be very good at it. Or you’d know about the rat in the house. Maybe more than one.
BOWSER:  I ... ah ... I don’t specialize in rodents.
PUSSUMS:  Obviously. That’s probably why they got me.
BOWSER:  But let me assure you, I’m no coward. I’m ready to fight to the death in the service of my Gods.
PUSSUMS: I feel better already.
BOWSER:  Ah... listen... I think we may have gotten off on the wrong paw earlier. I welcome you to these hallowed halls ... and I assure you that you’re extremely fortunate to now be in the service of the Master and His Mate. In our polytheistic world, with thousands of gods, you could have ended up anywhere.  But you’ve been blessed to live in the sanctuary of two of the most powerful gods-
PUSSUMS:  Uncle!
BOWSER:  What?
PUSSUMS: Enough with the preaching already. Go hand out tracts. Leave me alone.
BOWSER:  Why’re you so hostile? I’m only talking about core beliefs -something all us animals share.
PUSSUMS:  What? Do you believe in the vagaries of fortune and the futility of existence and the randomness of the universe?
BOWSER:  No. Of course not.
PUSSUMS: Then we don’t share the same beliefs.
BOWSER:  The ... the randomness of the universe. You can’t mean that.
PUSSUMS:  You’ve never been to a Pound. Let me tell you what it’s like. Pets - like you who want nothing more than to love and be loved -get locked up in cages because someone didn’t want them or abused them or just abandoned them.
BOWSER:  But -according to dogma-
PUSSUMS  Dog - ma? You call it dog-ma?
BOWSER:  Okay, okay -our creed, then-
PUSSUMS  You know what most pets are? Innocents.
BOWSER:  Well, yeah, I suppose you can look at it-
PUSSUMS: Innocents. So, sorry, Trousers.
BOWSER:  Bowser.
PUSSUMS:  I can’t get past that. Okay? I can’t get past the suffering of innocents.
BOWSER: All right, there maybe some rare instances-
(The voice of RIZZO, the RAT, is heard.)
RIZZO (O.S.):  She’s right.
BOWSER:  What? Who’s that?
PUSSUMS:  (quietly, to BOWSER: )  The rat.
RIZZO (O.C.) : Name’s Rizzo. The cat’s right - the suffering of innocents. I know about that.
PUSSUMS:  (quietly, to BOWSER: )  Keep him talking.
BOWSER:  What do you mean?
(PUSSUMS begins creeping around the room, trying to geta fix on the RAT.)
RIZZO (O.C.) :  I lost my wife, lovely Tara, just days before she was to deliver our first children.
BOWSER:  What ... what happened?
RIZZO (O.C.):  A trap. Took her an hour to die. It was horrible.
BOWSER:   Who would do such a thing?
RIZZO (O.C.):  The humans. Your humans. They hate us- because we’re different.
BOWSER:  In fairness -this is their sanctuary. You’re trespassing.
RIZZO (O.C.:  What? Aren’t all welcome in your religion?
BOWSER:  Well, I ... ah-
RIZZO (O.C.) :  Or is it just another elitist, self-serving organization?
BOWSER:  No, no. It’s nothing like that-
RIZZO (O.C.): Yes, I am a rat. But is not a rat a mammal? Hath not a rat paws? Hath not a rat a tail? Hath not a rat whiskers?
BOWSER:  Of course. And I’m sure ... I’m certain all are welcome in our religion.
RIZZO (O.C.): Then why are we persecuted?
BOWSER:  Pussums! Don’t ... don’t hurt him!
PUSSUMS:  What?
BOWSER:  Leave him alone.
PUSSUMS: You sure?
BOWSER: Yes .... I don’t know ... Yes!
(As they stand there silently, they hear the sudden loud SNAP of a trap.)
BOWSER: Rizzo?
(SILENCE.)
PUSSUMS: What’d I tell you?
BOWSER:  The randomness of the universe?
PUSSUMS: Get used to it.
BOWSER:   But isn’t there anything we can do?
PUSSUMS:  Yeah. Live for the day, Trousers. Just live for the day.
Curtain
===========================


The Gospel According to Bowser (Video)