Voice centered shooting plan, not what you expect.
AMP video notes
Scroll down for News and Notes (including articles about new TOS)
- 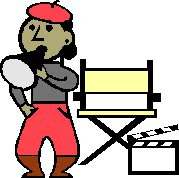 Voice sessions are set up exclusively for capturing the face of a speaking avatar delivering a line.  What is captured in the shot session are the mouth movements in sync with the voice.  In subsequent editing, the sound clip will be aligned with the mouth movements to produce a final clip that will present that line to the audience.
- Also captured in a  voice shot is any desired facial expression on the avatar. Depending on the shot list instructions, other characters or things may appear in the background or to the side.   Keep in mind that a single speech, as voiced, may extend over several video clips, showing the speaker, the reaction of hearers, and perhaps some event related to the story.

Although the voice capture from the voice session will not be used in final production, voice is captured to help in identifying the clip and in placing the voice clip in synchronized position

Planning of the shots is done by the director, voice engineer, camera engineer, and emote engineer.
The final list is copied into a notecard.  From this, the shot manager makes a series of panels, one for each item on the list.  Each panel carries the code (above) for the corresponding item.   These panels are put near the set (but out of camera sight) in the planed order of capture.

AMP makes the signs with a sticky note script by Maria Korolov (Available on Kitely market) .  She says:


Oh, I almost forgot to mention — this is licensed CC0. I hereby affirm that everything is completely original, and that anyone can do anything they want with these scripts, including using them commercially or reselling them. It’s all fine with me.

The voiced session requires only the voice engineer as speaking avateer.  Other avateers, if needed, can usually be managed by any volunteer or, possibly by Non-Playing Characters (NPC's)

Each shot is initiated by the Shot Manager, who puts a sign with the clip label (Coding for audio and visual files) on camera before the shoot starts.  When the Camera Engineer  calls "rolling"  the shot manager calls out the shot code and removes the sign, putting it in sequence in a place reserved for completed clips.

Voice engineer takes cue from the shot manager' removal of the panel and plays the voiced speech.

When speech is done, shoot manager calls cut and repeats the shot code. Camera director stops the recording and renames the clip with copy-paste of code from the notecard copy of director's list.

The Voice Engineer runs each speaking avatar in the scene, feeding the prerecorded voice through the avatar. Each speech will be captured in close-up, so that lip movements will closely match the voice.  The avatars are positioned by pose balls so that the positions can be replicated. The same prerecorded voice clip will be reused for each of about three captures of the same speech.


People needed for the voiced sessions:

Speeches may be captured at several angles (left, right , and face-on) and at  several levels of close-up (face-only, upper torso and face, full body).  These may be captured by one camera with multiple reads or with one read and multiple cameras.  If multiple cameras cameras are used, each camera should take a shot of the color panel in the set so that the captures can be matched for color balance.

The experience of AMP is that it is difficult to get several captures (even using the same viewer and version) to produce reliably matching results, probably because they have different video cards.   So we use a single viewer and replicate the speeches as needed.  Since the avatars are on pose balls and the voices are recorded, the replications give an excellent match.

Settings to be recorded for all sessions

Voiceless sessions are mainly used for these purposes:
Voiceless captures are generally planned from the script or specified by the production team after the voice capture is done as needed to support the voice capture.

Voice is usually be captured for aid in identifying the clips.

People needed for the voiceless sessions:

Post capture requires upload and should not be started till all captures are done for the day.  Uploads may take several hours and will require substantial bandwidth.  Camera director sends each ckip to the NMA repository.

After verification of successful storage in the  NMA repository and backup, Camera Director may delete the character folders from the capture computer
-

The Journal of Virtual Studies currently has a call for papers open.  The journal is peer reviewed and focuses on the use of virtual spaces for knowledge immersion.  Do you work or research in Second Life,  OpenSim or any other virtual platform?  Have you been engaged in research, exploration or reflection when using MMPORG’s?  Have you discovered a virtual space with knowledge immersion possibilities or have you engaged in a fascinating new way to explore the virtual through any number of immersive online applications?

These and many other questions are explored by the JoVS.  The Fall 2014 issue is expected to publish in September.  For details, see here: Journal of Virtual Studies

The theme is 'TRANSCENDING BORDERS.' Artists & filmmakers can interpret the theme as they see fit. Whether transcending borders between time and space, past and present, one nation and another, one language and another, a culture or civilisation or any other of the innumerable borders that present themselves as we navigate our lives. You the artist... You the machinimatographer...You decide.

Email ThisBlogThis!Share to TwitterShare to FacebookShare to Pinterest
Labels: VID