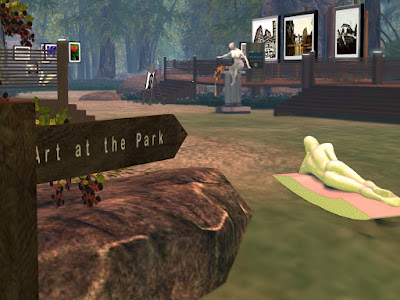 
Thousands of stories, and hundreds of authors later, the program remains dedicated to promoting the power of stories to transform and inspire through live voice presentations: "We bring stories of all kinds to life, in Second Life."
-
Seanchai will kick off its 2016 celebration on Linden Endowment for the Arts region 9, which has been granted to the Library for the winter and spring months.  "Crazy Eights" will feature several regular weekly programs in addition to special story events and workshop opportunities open to the entire community.
-
"We wanted to accomplish two things with the LEA project," said Chief Storyteller Shandon Loring, "We wanted the opportunity to celebrate what we do every week by pushing the boundaries of the story presentation environment, more so than is possible on our home region.  We also wanted to extend the opportunity to the entire spoken word community to participate in our party.  Eight years in virtual worlds is quite an accomplishment."
-
The popular "Tea Time at Baker Street" Sunday series will be moved to LEA 9, taking up residence in an immersive Baker Street environment for the duration of "Crazy Eights." Sessions will commence presenting the "The Return of Sherlock Holmes" beginning with  it's first short story adventure "The Empty House" at a date to be announced in late January.
-
The Tea Time staff recently completed its first full circuit of the Sherlock Holmes canon of Sir Arthur Conan Doyle, and is well on its way through a second circuit of the 56 short stories, four novels and assorted shorter works.

Seanchai will also move one book series out of its weeknight schedule per month. That will take place on an island which will be designed to surround guests with 360 degrees of story Immersive environment, "the words reflected in the visual environment," explained Library Lead Caledonia Skytower.  February is scheduled to feature Tracey Garvis Graves' "On The Island," and March will feature O.R. Melling's "Hunter's Moon" from The Chronicles of Faerie series. 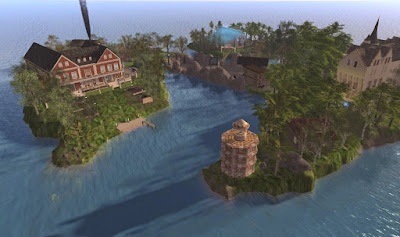 Seanchai staff have been working with real world partner, Tacoma Little Theatre (TLT), on securing funding for another EXPLORE project, building on the success of last winter's EXPLORE The Great Gatsby pilot.  Funding was confirmed just before Christmas for a new edition of the online program due to open in April at Seanchai's property in the Kitely grid on the open metaverse.
-
Supporting TLT's production of Christopher Durang's absurdist comedy "Vania and Sonia and Masha and Spike" the new Explore will focus on the works of Russian author and playwright Anton Chekhov and the reflection of many of his characters and situations in Durang's 2013 Tony Award-winning play.  At least one crossover  performance is currently planned of scenes from Chekhov, presented by actors in the Explore build along with an actor live in front of an audience in TLT's home theater in the Pacific Northwest, U.S..
-
Additionally, Seanchai is in the process of developing a planned on-going partnership with "Art at the Park" at Holly Kai Park in Second Life which will begin in 2016 and be presented every four to six weeks.
-
"Inara and I were chatting about ways to encourage people to explore visual art installations, after the opening gala excitement had passed, in ways that would extend the relevance of an individual's interaction and keep the artwork itself the focus," explained Skytower. "Stories at the Park" was the result of this conversation.  Members of the Seanchai staff will compose short works of prose or poetry inspired by the artworks themselves, and present them in a live session at the Park.
-
"We aren't turning into a writing program," elaborated Skytower, "our focus remains being a library whose collection is spoken words.  Many of our staff do write, and this is a way to extend a different opportunity to them.  There are a lot of directions that this could develop in. It's exciting!"

More details will be available on all of these programs as they launch over the next several months. Seanchai Library will continue to present their weekly story sessions, Monday through Thursday at 7pm slt.   Seanchai Library will also present various weekend sessions on their home parcel at the Community Virtual Library on the Bradley University sim:
(http://maps.secondlife.com/secondlife/Bradley%20University/100/209/28) as well as their branch on the InWorldz grid, and on the Kitely grid on the open metaverse.

The Hypergrid WIP is a one hour "show & tell" of works in progress or recently completed. All builders from beginner to pro are invited.  Presentations are in voice and text.  For text presentations, best bring the text in a notecard and paste it into chat.  Voice presentations may be captured in video.  Stills and videos from the show may appear in this blog.